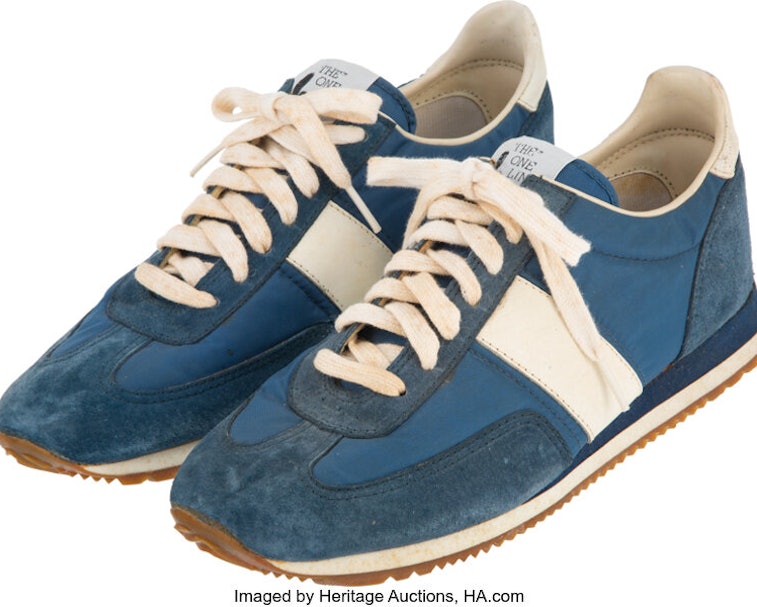 When it comes to dealing with bootleg and counterfeit sneakers, Nike is probably one of the most experienced brands out there. In the last year alone, the sportswear giant has gone after John Geiger’s Air Force 1 riff, Warren Lotas’ Dunk lookalike, and MSCHF’s blood-filled Satan Shoes.

What many don’t know is that the first to create a knockoff Nike sneaker was actually the Swoosh itself. Forty-two years later, one of those rare bootlegs is now up for auction.

Work smarter, not harder — As Nike founder Phil Knight tells it in his book Shoe Dog, the United States government slapped the company with a $25 million tariff in 1977. The tax imposed on nylon shoes transported across international borders was calculated based on the price of a similar American-made shoe, not the factory cost or manufacturer’s price of the product. Knight claims the tariff was a jab from competitors in the shoe and rubber industries that got the government involved in trying to bring down the Swoosh.

Nike couldn’t afford the $25 million tariff at the time, and thus the One Line sneaker was born. In 1980, the brand created a cheap lookalike of its Oceania running shoe that was almost a direct copy without any of the branding. Its blue nylon upper is given suede overlays on the heel, toe, and laces, while the tri-colored soles are finished with rigged texture for performance. Instead of the big, white Swoosh and Nike branding on the tongue and heel tabs, the One Line has a single, white stripe and “The One Line”/“One” branding, respectively.

One smart (shoe) dog — Given Nike’s multi-billion-dollar brand status today, it’s safe to say the plan worked. “It was a knockoff, dirt cheap, with a simple logo, and we manufactured it in Saco, at Hayes’s ancient factory,” Knight writes in Shoe Dog. “We priced it low, just above cost. Now customs officials would have to use this ‘competitor’ shoe as a new reference point in deciding our import duty.”

The One Line is the only known model in Nike’s roster that has zero branding on it whatsoever, according to Heritage Auctions’ product description. It was quietly released in small quantities to discount outlets and served as enough evidence for Nike and U.S. Customs to settle on a more reasonable tariff of $9 million. Knight himself admitted his memory of the details is muddy, but one thing remains true: Nike would have shuttered without the One Line.

For those who want to own a piece of iconic Nike history, Heritage Auctions has opened bidding for the men's size 9 pair from 1980. The auction runs through April 20, and as of writing the highest bid stands at $5,000.