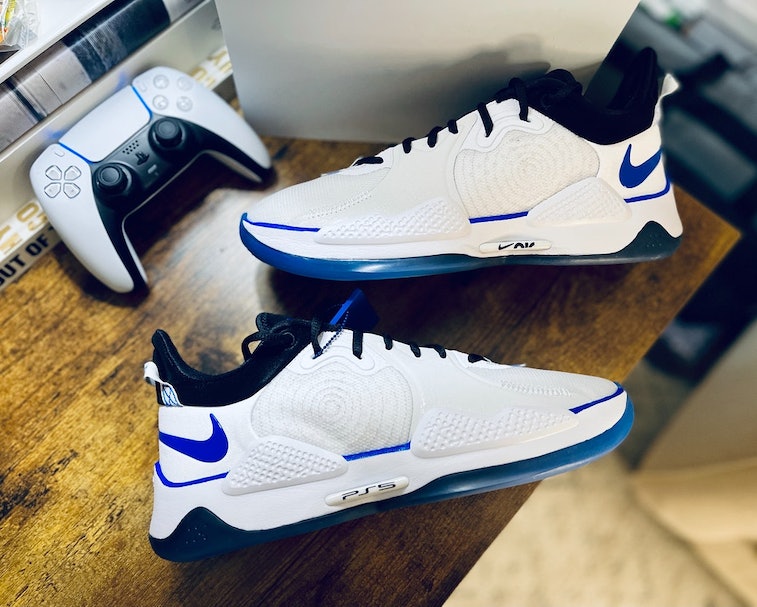 At the beginning of May, Nike and Sony revealed they were once again collaborating on a PlayStation-themed signature sneaker for NBA star Paul George — this time featuring a design mirroring the PS5. With Sony selling nearly 8 million units of the console since it launched in November of 2020, and the new “PG5” marking the 5th edition of George’s Nike shoe, everything aligned perfectly for their May 27 launch. But now, Nike has announced its “PlayStation 5” PG5 shoe has been delayed a month.

Although Nike didn’t share a reason for its delay, the company has been postponing plenty of its recent designs due to shipping delays, factory closures, and slowed production rates caused by COVID-19. The setbacks have primarily affected hyped sneakers — since Nike uses special material for the designs that it doesn’t normally have at its disposal — while the delays have been exclusive to the U.S., as Nike has been able to release the same silhouettes on time in Europe, Latin America, Asia, and more.

A long time coming — Despite the postponement, sales of Nike’s themed PG5 will probably remain unaffected. With every PlayStation 5 release selling out in seconds, hype for the console isn’t stopping anytime soon — so neither will the excitement for its matching sneakers.

Still, the delay is disappointing, especially knowing the design process of the shoe was extremely discreet and carefully planned. As the PlayStation 5 had not yet been officially announced while Nike and Sony were working on the sneakers, actual images could not be shared. Instead, Sony Interactive Entertainment art director Yujin Morisawa verbally described the design and vision to the Nike team, who then transferred the concept to George’s latest shoe.

Morisawa even went so far as to literally cut off a piece of a DualSense controller and ship it to Nike so the brand could have a reference point for the sneaker’s design. He told Input that he wanted Nike to really get a feel for details like the texture and patterns being used across the PS5, such as the small PlayStation squares, triangles, circles, and Xs that are all over the DualSense controller.

Game on — Matching the sleekness of the PlayStation 5, the PG5 sneakers encompass every part of the console. Its white upper represents the shell of the PS5, while black details represent the inner workings and blue accents of the console’s vibrant lights. There are also “PG” and “PS” logos on the left and right shoe, respectively, a touch that has been present on George’s previous PlayStation x Nike sneakers.

Nike has confirmed its “PlayStation 5” PG5 shoes will now launch June 17 on SNKRS, with the pair retailing for $120. The sneaker drop will likely sell out just as quickly as one for the console, so stay focused — it’s almost game time.