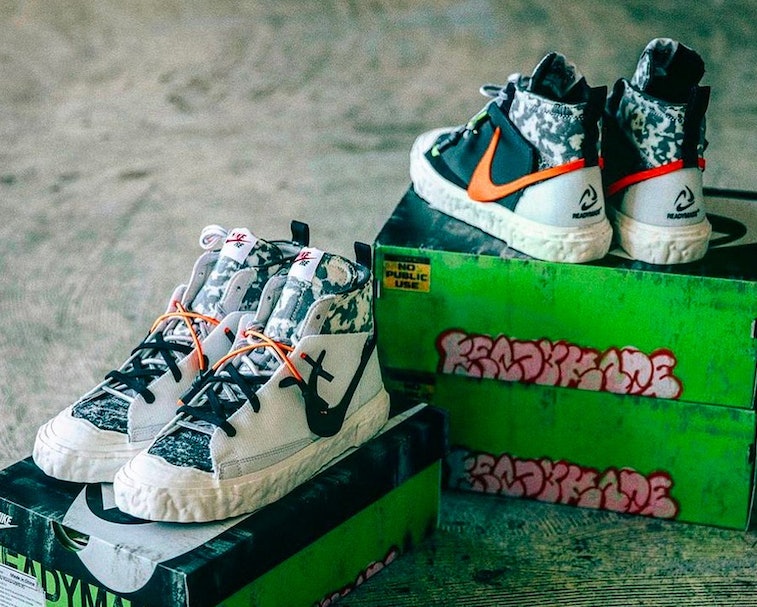 After a few weeks of teasing, ReadyMade has officially announced its collaboration with Nike on the Blazer Mid. The Travis Scott-approved sneakers take a raw approach to one of Nike's original silhouettes, and the unrefined look is likely to be polarizing among sneakerheads.

What one finds grotesque, another may find fascinating. And if there's one thing that's certain, it's a quick sellout come February 27, when ReadyMade's Blazer is set to release. The Japan-based company has found collaborators in footwear, apparel, and even furniture — but this is its very first linkup with Nike.

Were the kicks exposed to radiation? — The mid-cut Blazer is nearly unrecognizable under ReadyMade's stead, with panels stitched together haphazardly and a bulbous midsole that looks like a series of bumpy growths.

The two colorways differ with a primary panel coming in white and black, but the common link is a marbled underneath on the collar and tongue. Hanging precariously off the sneaker is a severely warped Swoosh, and a logo created just for the occasion puts Nike's iconography in an arrangement similar to the recycling icon. Personally, I could do without the sneakers — but I wouldn't mind getting that tri-Swoosh on some apparel.

The Blazer's lacing system has also been reconfigured, splitting into two halves with standard black laces and an orange cord with rubber tips. To complete the rough-and-tumble aesthetic, ReadyMade's Blazers will come in a special radioactive green and black box with the brand's name in graffiti.

Stay tuned for more release details — So far, we know ReadyMade's Blazer Mid will release February 27 for $160. How and where, exactly, it'll go down has yet to be announced — but further deets should be coming in soon.

Until then, we're left to debate the merits of the sneaker. Has experimentation gone too far, or is this just the latest example of the great possibilities when Nike lets its collaborators run wild?