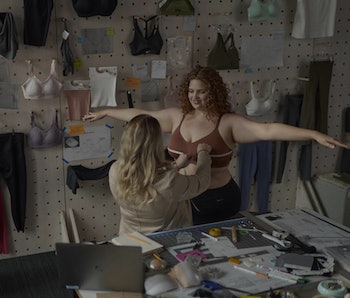 Nike’s latest models aren’t real people, but they do jiggle and sweat like humans. At its Future 50 of Her event in Los Angeles, the brand unveiled Haley, a “thermoregulation mannequin” capable of sweating to help Nike test its sports bra technology. She comes with a friend too, a less eloquently-named “Brabot” that features a chest that mimics the soft tissue of breasts.

Although it’s unclear what cup size it boasts, Brabot in particular serves as a useful stand-in for anyone who actually has, well, boobs. The torso robot can stretch and move repeatedly without getting tired, offering testing consistency for Nike products — meaning quality is breast assured. In a similar manner, Haley’s sweaty nature helps designers decide where ventilation or extra sweat-wicking may be needed.

“Sport will never be defined by size” — For actual humans, Nike has expanded its use of body-scan artificial intelligence, taking three-dimensional measurements of thousands of women to learn more about how they move, where they sweat, how they feel, and where they feel discomfort. With this data, Nike can see the way breasts react to exercise and create more inclusive apparel. As of now, the brand offers sports bras up to size 4X.

“The real breakthrough in better-fitting apparel for more body types has been the proliferation of digital tools,” said Nike’s vice president of global apparel Melissa Schirripa at the Future 50 of Her event, according to Well and Good. “We’re using data visualization and avatars to more accurately match the wide range of curves, heights, and weights we all have. We’re not just grading up, we’re creating specific designs for a much larger percentage of our population to reinforce that sport will never be defined by size.”

During the Future 50 of Her event, Nike confirmed it would be expanding its size ranges for its leggings and sports bras, with the latter expected to cater to more than 70 cup sizes. Customers will be able to choose between three different levels of support to ensure the best fit.

An expanding demographic — Body diversity has been at the forefront of sportswear recently, particularly when it comes to breasts. Nike’s inclusive efforts come a few months after Adidas teased its own sports bra campaign including imagery of 25 different pairs of bare breasts. At a closer look, the ad showed the markings sports bras can leave behind after being worn, bringing attention to the prolonged issues of the bras’ fit and function (among other things).

With brands like Nike and Adidas working towards a more inclusive (and comfortable) future of exercise, more people may be able to subscribe to the idea that sport is for everyone — even Haley and Brabot.