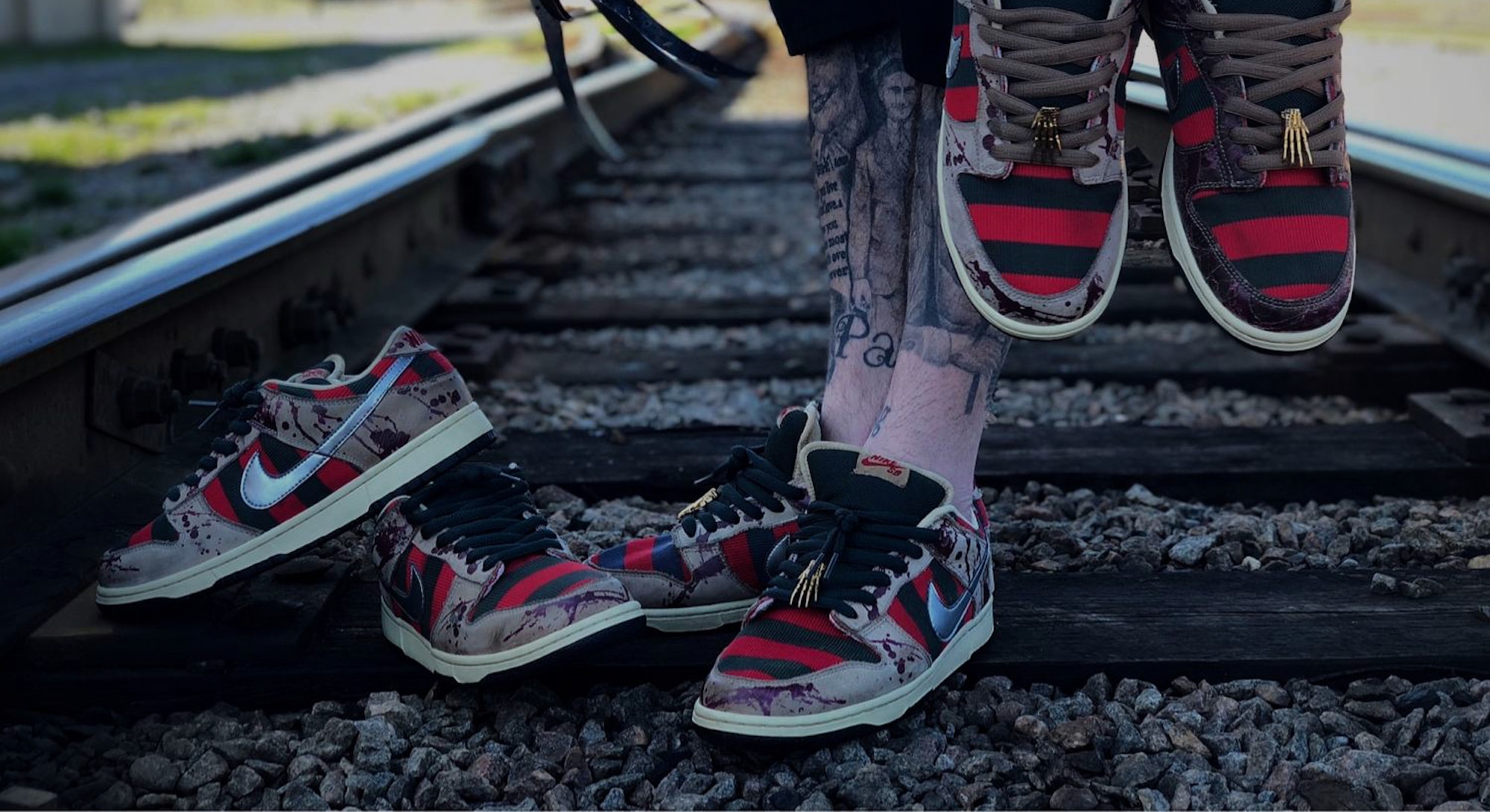 In 2007, Nike SB planned on celebrating Halloween with a trio of horror-themed sneakers.

A Trainer 1 would take loose inspiration from Dawn of the Dead and use the same colors as one of the movie’s original posters from 1978. A Dunk would take a similar route and use white, red, and black panels to signify Jason Voorhees’ mask from Friday the 13th.

The source material would be much more clear on the third and final sneaker, an SB Dunk Low that took on Nightmare on Elm Street. One set of panels would feature the same red and green stripes as Freddy Krueger’s trademark sweater, while the others consisted of an unsettling skin tone covered in splashes of blood. Made of a reflective silver leather, the Swoosh signified Krueger’s razored gloves. Inside the shoe, the insole featured a graphic of burnt flesh to match Krueger’s face.

Only two of these three sneakers would actually end up hitting stores. In an excruciating development, the only one that wouldn’t was the Freddy Krueger SB Dunk. The sneaker was pulled at the very last minute and would go on to become one of the most legendary sneakers of all-time.

A legend is born

13 years later, the unreleased shoe is back on people’s minds because of an Air Max 95, releasing this Sunday, November 1, that pays homage to the shoe that never was. This time around, the sneaker plays it much looser in its recreation of the slasher’s uniform and opts for red and brown stripes instead of red and green. The blood drips are also much less graphic than those of its predecessor, as they’re more hidden away on the silver lace keeper and heel counter. Nowhere in Nike’s marketing will you find a reference to the Nightmare on Elm Street villain — because of what went down the first time.

A cease-and-desist letter from New Line Cinema, the producers of the Nightmare franchise, put a halt to the Freddy Krueger SB Dunk. The claim of copyright infringement came so late that the sneaker had already made its way out to retailers, which were then ordered to return the shoes to Nike so they could be destroyed to avoid litigation. Apparently, not everyone followed orders, because a small number of the Dunks still made their way out to collectors.

The story goes that a few were smuggled out of Nike’s factory by employees and additional pairs were “mistakenly” sold early by a shop in Mexico. It’s estimated that a total of 30 pairs of sneakers ultimately made it to the public, according to numerous sneaker blogs, but that number could very well be higher given the possibility of people who were able to remain quiet and / or avoid the temptations of a sudden windfall.

The rareness of the Freddy Krueger SB Dunk isn’t the only thing that makes it special. Those who were following sneakers diligently in 2007, when the culture was still much more niche, will remember it being a hotly anticipated shoe. Sneaker and streetwear forums, the premier place to talk about these releases before blogs became more prevalent and Instagram helped blow open the doors, were ablaze with excitement (and then disappointment) over the detailed ode to the man with razored gloves.

“You had just kind of realized the longevity of some of those early Nike SB releases,” says Nick Engvall, a veteran sneaker writer who now works as a consultant. “You could go in and buy most of the shoes in your local skate shop, then you saw people paying crazy prices after for probably the first time ever. So fast forward to [the Freddy Krueger] and you can look at it and say there’s money to be made if I can get it. And then myself, and a lot of the people I was around, we just wanted to wear cool shit.”

Engvall remembers reading that the Freddy Krueger SB Dunk had been canceled on forums before anywhere else. A thread from BapeTalk that’s still alive today reveals how the news came from on the ground. “My friend Chris was telling me that a rep from Nike SB was in his shop last week and said the Freddy Krueger Dunks are going to be canceled because Dreamworks [sic] is filing a lawsuit over the ‘sweater’ pattern on the shoe,” a user wrote before hedging his bets. “Ehh lame I hope this is not true.”

As the replies started pouring in lamenting the cancellation, so did reports of samples that had surfaced for sale and tale of a successful purchase through a friend at a skate shop. A post on NikeTalk also saw a user who said he found a pair of the Freddy Krueger SB Dunks for just $40(!) at an outlet store. With all these stray appearances of the sneaker, the legend began to calcify and left room for the possibility that more than 30 pairs still exist.

The forums also bore an alternative theory, a conspiracy of sorts, as to the real reason the Freddy Krueger SB Dunk was canceled. Supposedly, Tinker Hatfield, the legendary Nike designer behind some of the most beloved Air Jordans, was irked by comparisons made between him and the villain inside company headquarters. According to the rumor, far-fetched as it may be, he hated the nickname so much that he ordered the release canceled. If anyone outside of the executive suite had the power to do so, it would definitely be Hatfield.

Believing this theory also requires believing Hatfield was sensitive and power-grabby enough to make such a move. Engvall, for one, doesn’t buy it. Having spent time with Hatfield personally, he says the man is way too “chill” to be the true source of many sneakerheads’ anguish. Still, it’s a funny theory and only adds to the mystique of the shoe.

Suddenly, you had two dedicated subcultures ready to get after a shoe.

It wasn’t just sneakerheads who were excited about the Freddy Krueger SBDunk either. News of the upcoming release made its way over to horror fans, bringing a crossover appeal that was still rare for sneakers. Suddenly, you had two dedicated subcultures ready to get after a shoe and make the pursuit more difficult — a cross-section Nike continues to appeal to today with yearly Halloween-themed releases.

The only sneaker that comes close to comparison is the unofficial “Heineken” SB Dunk, but it didn’t bring beer-drinkers into the fold. (Ironically, the sneaker is now part of a legal battle Nike is waging against an independent shoe designer.) It too saw its release halted because of a cease-and-desist letter, but not before it had already gone on sale. More sneakers entered the market because of Heineken’s late realization, but the shoe still fetches upwards of $4,000 today.

These unexpected odes, the kind to unequivocally stir controversy, were regular occurrences for Nike SB — which, ultimately, served as a breeding ground for sneaker culture and daring collaborations as we know them today. Fewer eyes were on the skateboarding line than the wider umbrella of Nike, with only skateboarders and sneakerheads paying attention, so it was given unique freedom to put out daring designs. It also established the practice of bringing in guest designers in the form of pro skaters, skate shops, and artists like Futura who were adjacent to the scene.

Another one of the most heralded Dunks of all-time, the “Tiffany” Low made in collaboration with Diamond Supply, owes a large part of its success to its outside inspiration. Released in 2005, it featured Tiffany’s signature shade of blue along with black croc skin leather and a metallic silver Swoosh. It was a hit then, and now can sell for more than $4,000 as well.

Now, similar and sanctioned collaborations are commonplace. Nike’s worked with PlayStation, Adidas has released shoes with Arizona Iced Tea, and Bape has collaborated with Heineken, ironically. These outside brands see the value in sneakers and streetwear and line up for the chance to be exposed to their young demographic. But in 2007, when the Freddy Krueger Dunk almost released, few saw what was to become: a subculture that would be adopted by the masses and a single sneaker worth upwards of $30,000.

You can’t blame New Line Cinema for failing to see the potential and either play ball with Nike or simply sit back and allow the shoe to release. But, as a result of that infamous cease and desist letter, the Freddy Krueger SB Dunk became an even more heralded sneaker — and one of the last vestiges of sneakers as a subculture. The madness we all participate in as sneakerheads today, well, it can be traced back to the nightmarish legend of Freddy.

Read next: The Halloween sneakers that will haunt your dreams

A live shopping app for exclusive streetwear and hyped art? NTWRK built it.