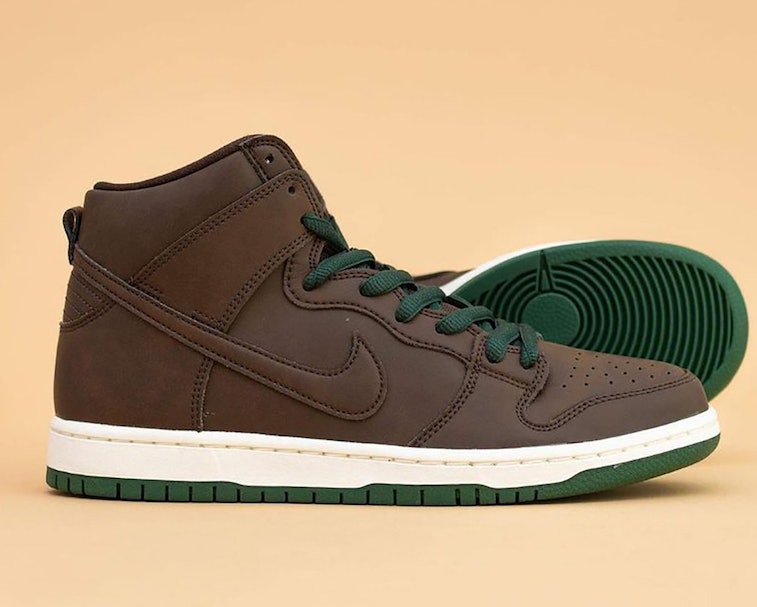 After releasing a bonkers "Turkducken" Dunk for meat-lovers near Thanksgiving last year, Nike SB has cooked something up for the vegans.

The "Baroque Brown" Dunk High will become this week the latest entry for the most in-demand silhouette of last year and the foreseeable future. Using vegan leather instead of the real thing, the deep brown upper as an unpolished texture that stands out among the more vibrant releases of this year. It pairs nicely with a forest green outsole and laces — not quite as earthy as Bodega's prehistoric "Fauna Brown" collaboration but imbuing a similar aesthetic.

Release details are still slim for the kicks, and if it stays that way getting yourself a pair will be a callback to the nascent days of the Dunk.

Popping up at skate shops around the world — Long before there was a SNKRS app or reseller services, or anywhere near the audience for footwear there is today, skate shops were often the only place you could find coveted SB Dunks. Finding a stockist could require picking up the phone or even, gasp, walking into your local haunt to find out if they'd be receiving the kicks you so desired. A successful purchase was by no means guaranteed, but you could increase your odds by making friends in the right places.

So far, the "Baroque Brown" Dunk has only been confirmed individually by a few such spots scattered across the globe. They already released just outside of São Paulo, Brazil, at Walls General Store, and in Mexico at Alive, but another Mexican boutique, Soul, will be raffling off pairs soon, which suggests other retailers will follow.

If you find this rollout strange, you're not alone. I was there chasing down sneakers when such disorganized releases were common, but it's been so long that I didn't think it could happen again. There's still plenty of time for Nike to pull back the curtain to make things easier for you, but here's hoping it doesn't allow for an outlying return to the way things used to be.

It may be more difficult, but that was just part of the fun. Chasing down your Dunks successfully brought a feeling of accomplishment that just can't be replicated in this era of click-and-pray (or, more often than not, click, pray, take an L, and curse).