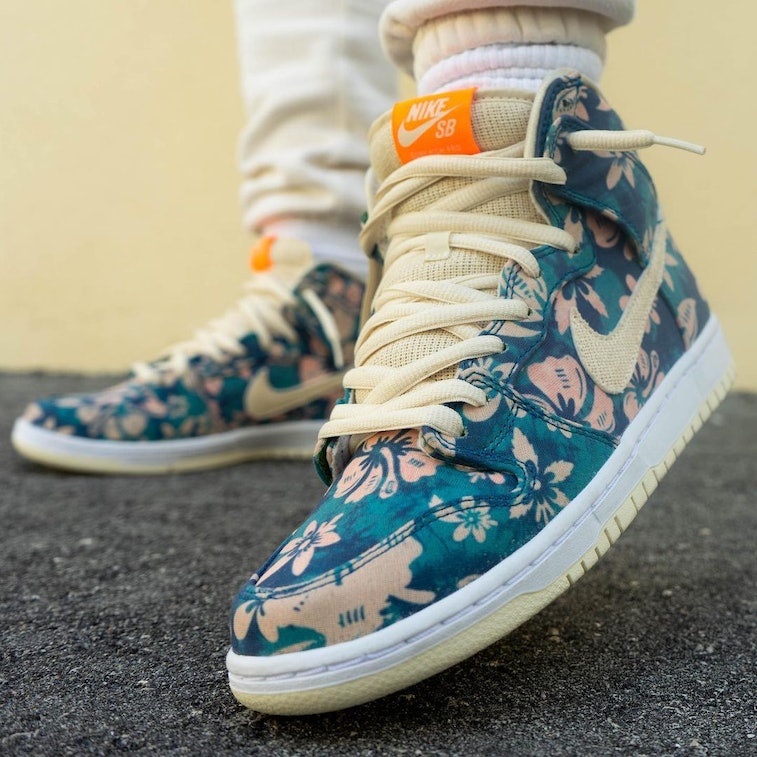 Slowly but surely, spring weather is approaching, and we’re breaking out the appropriate attire. Of course, there’s no design that embodies warm weather more than Hawaiian print — but instead of donning a patterned shirt, we’ll be sporting the look on our feet. Nike SB has prepped its coveted Dunk High for summer and dressed it entirely in a Hawaiian print, packing a little more heat into one of its hottest silhouettes.

As the longer days and better weather excite us for summer, Nike has kept busy aligning a tropical range of its own. The brand recently debuted a “Lemon Drop” women’s exclusive Dunk Low, featuring a vibrant yellow design inspired by its namesake fruit. Not long after, the Swoosh announced the upcoming release of another Dunk, this time dressed in the iconic auto paint scheme called Gulf Oil livery. Both pairs join a bigger lineup of classic Dunks, as Nike attempts to satiate sneakerheads come summer.

Take it easy — None of the brand’s anticipated sneakers look as relaxed and carefree as the “Hawaii” Dunk High, though. Sporting shades of blue and pink, the shoe almost looks as if it’s been painted with watercolors as hues blend together. Like a style you might find on a Hawaiian-print shirt, the sneaker’s upper is entirely decorated in a floral print, boasting both cartoonish flowers and tropical hibiscus.

Furthering the island feel of the Dunk, the tongue and Swoosh appear to feature an undyed hemp construction, with a cream colored outsole to match. The look is reminiscent of the woven bamboo paneling used on 2004’s “Aloha” collaboration with Kicks Hawaii. And, like another past design, the insoles boast volcano and burning palm tree graphics — both previously seen on Nike’s volcano-inspired SB Dunk Low Premium “Hawaii” from 2006.

Rather than re-release older models — a method the brand has increasingly adopted over the past year — it seems Nike has combined the best of both worlds to craft an entirely new Dunk. The nostalgic design still gives sneakerheads the desired “retro” feel, while keeping the early ‘00s pairs sacred by leaving them untouched. Might we expect more sneaker mosaics from the brand?

Summer heat — Nike has yet to announce a release date for its Hawaii Dunk High, but given the shoe’s theme, we’ll see a drop date as soon as the weather gets warmer. Expected to retail for $120, this tropical sneaker has range — we can see anyone from frat bros, OG sneakerheads, or skateboarders trying to score a pair. It looks like they’ll be able to do so at Orange Label shops exclusively, as the Dunk’s orange tongue tag suggests. The pair is just another reason to count down the days till summer.