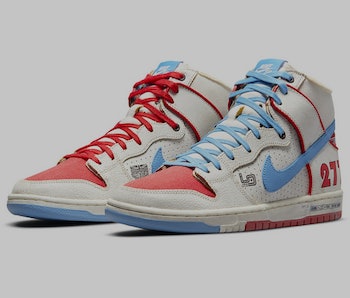 Earlier this spring, Nike SB released a Dunk Low culled from the most iconic color scheme in car racing. The in-line “Gulf” Dunk release combined powder blue and orange as a nod to the iconic livery from Gulf Oil’s racing team, complete with the same white and black circular number badge. The two cars most associated with the paint scheme are the Ford GT40, as portrayed in Ford vs Ferrari, and the Porsche 917 made specifically for the Steve McQueen film Le Mans.

The Gulf Dunk brought attention from the gearhead community, and now they’ll have another sneaker to pique their interests while taking cues from another famous car. Pro skater Ishod Wair and fashion designer Magnus Walker have collaborated on an SB Dunk High Pro inspired by Walker’s own 1971 Porsche 911 T 277. The red, white, and powder blue Porsche is Walker’s favorite car in his collection — and it’s well-known within the wider world of car aficionados.

Pre-made scuffs feature across the Dunk’s midsole, while the leather on the upper is cracked with faux signs of wear. On the foxing, the very same “277” that adorns the Porsche appears, while the Urban Outlaw logo from Walker’s Porsche documentary is printed onto the corner. Nike also reworked its name to appear in the style of Porsche’s logo on the midsole.

And then there’s the interior — The lining for Wair and Walker’s Dunk uses two colors of tartan plaid across the left and right sneaker, a nod to the unusual seats inside the vintage 911. Even though the leather upper already shows signs of wear, as it’s worn off by natural (or unnatural) use it’ll give way to reveal a gold color taken from the car’s original paint job before its current treatment.

Rounding out all the intricate details is embroidery of the Union Jack flag, a nod to Walker’s home country of the United Kingdom.

Gearheads and sneakerheads clash — Two worlds will collide again come June 21, when the Ishod Wair x Magnus Walker Dunk release through the SNKRS app for a lowly $120. Sneakerheads will have the upper hand through experience when it comes to securing a pair, but here’s hoping a few gearheads are blessed by good luck as well.