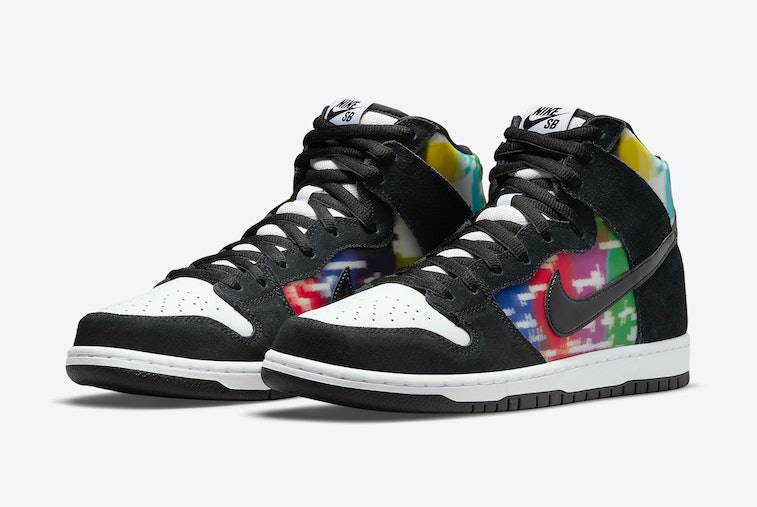 Nike is rolling out Dunk designs as fast as it can to keep up with demand. With the Swoosh stocking plenty of neutral designs, though, it seems it’s up to Nike SB to give consumers more creative takes on the model. Channeling a retro aesthetic, the subdivision’s latest Dunk High features a rainbow upper, inspired by the “no signal” screen you’d see on TV, complete with patent leather Swooshes. The design also includes runtime details, a nod to the camcorder and VHS videos of years past.

With most of us watching an increased amount of television due to quarantine, these “TV Signal” Dunks arrive at the perfect time. Much like Nike SB’s recent releases, the retro design takes us back to the 2000s, when Dunks were once popular without the overwhelming hype of social media and Travis Scott. We can only hope those copping this sneaker are aware of what VHS tapes are.

Don’t change the channel — Combining green, blue, yellow, red, and purple stripes, the Dunk High emulates a television screen without signal, adding static-like white flecks to add to the illusion. Mudugards, eyestays, and heels keep it basic with smooth black leather, while the Swooshes stand out from the rainbow panels by using a shiny black patent leather.

Inside the shoe, the television concept is carried over on the insoles, which bear scrambled signal graphics, along with a runtime of 0:0:01. Underfoot, a basic white midsole and black rubber outsole complement the black and white upper.

A short signal — According to reputable sneaker account @nikesbornothing, the Dunk Highs are expected to drop May 15 on SNKRS. When it comes to a U.S. drop, though, the signal may not reach overseas.

The account claims a U.S. drop, while planned, was reportedly canceled, and that the sneakers are exclusive to the U.K. But the store that first posted photos of this Dunk a few weeks ago — L.E. Way Singapore — is based in the Asia Pacific region, making a global release a more likely possibility.

We’ll have to wait for the official word from Nike SB, especially as more Dunk releases are expected throughout the summer. Even if you miss out on this design, the Swoosh is guaranteed to be dropping a slew of new sneakers — almost to the point where the market is overcrowded — so you’ll have plenty of chances to score the silhouette.