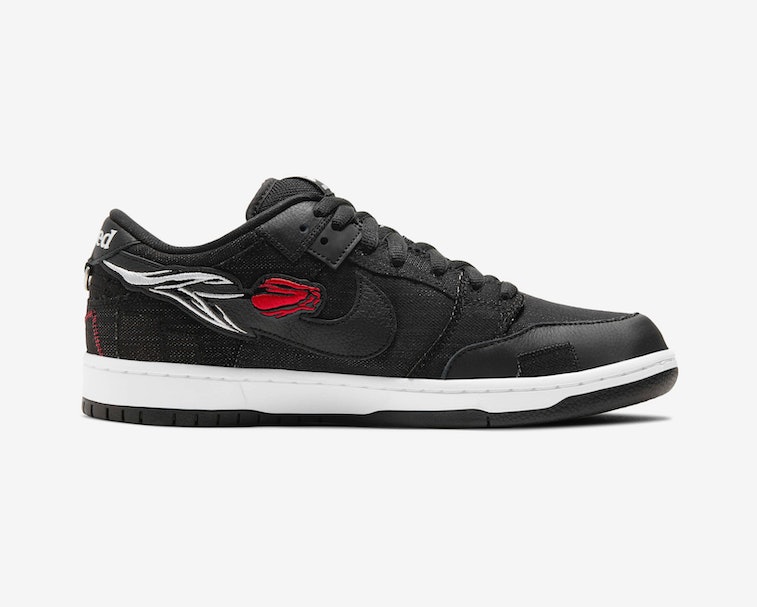 A very emo Dunk is in store, courtesy of Japanese designer Verdy through his Wasted Youth imprint. The sister brand to Girls Don’t Cry is partnering with Nike SB on a black and white, rose-adorned Dunk Low Pro that wouldn’t look out of place at a Hot Topic.

Patchwork denim with exaggerated stitching covers the upper, with tumbled leather coming through on the Swoosh, toe cap, mustache, and top of the eyelets. On the sneaker’s medial side, a customized Swoosh is transformed into a full-length rose for one of the few times we see a collaborator play with Nike’s flagship logo.

The Dunk’s punk and skate roots come through clear from the jump, but when you look closer you’ll find details that are more My Chemical Romance than Black Flag.

Zooming in — Beneath the mustache, which is branded for Wasted Youth instead of Nike, you’ll see a metal D ring hanging off — a nod to the belts popular within punk and emo culture. Sitting down further is contrast red stitching, but that has nothing on the insole, which bears antisocial messaging best said while brushing away fringe bangs.

“No Thank You I Don’t Need Your Support” and “Don’t Bother Me Anymore” both appear on the inserts, the former in faded block text and the latter in a hand-written script. With yet another emo revival upon us, otherwise known as the fourth wave, the Wasted Youth Dunk couldn’t arrive at a better time. Sneakerheads, however, are a far cry from mall punks — and you could say it’ll be mostly posers who get their hands on ’em.

Dropping soon — Nike has confirmed the Wasted Youth Dunk for an April 6 release on the SNKRS app, which will give you a much better chance at purchasing than the Japan-only Girls Don’t Cry Dunk from 2019. Pricing is set at just $110, and come 8 a.m. ET people will be queuing up digitally for a pair like The Used just released tour tickets.