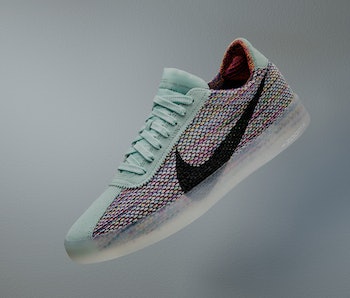 Ahead of this summer’s Olympics, Nike SB has announced a new sneaker that bridges two projects from the legendary designer Sandy Bodecker.

Bodecker, who passed away in 2018, spearheaded Nike’s very first skateboarding shoe and led the team that sought to break the two-hour marathon barrier — an achievement finally accomplished a year after his death by Eliud Kipchoge while wearing the Air Zoom Alphafly Next%.

Now, the same technology from Nike’s industry-leading running shoes will appear in a skateboarding sneaker for the very first time. The new Nike SB Sandy ZoomX Bruin equips the nearly 50-year-old sneaker with ZoomX foam cushioning, a full-length carbon fiber plate, and Flyknit upper — all firsts for the SB line. It’s no stretch to say this is the most advanced skate shoe ever made and, fittingly, it’ll make its debut in the first Olympic skateboarding events.

A staple fully transformed — Nike first released in the Bruin in 1972 as one of its very first low-top basketball sneakers. Its appearance in 1985’s Back to the Future helped cement its long-enduring appeal, and in the 2000s it was adopted by Nike SB. Similar to the Dunk, the Bruin was too outdated for basketball — but it still checked all the boxes for a reliable skate shoe.

Nike SB has since played around with the Bruin, giving it React cushioning last year as part of the brand’s initial plans for the Olympics prior to postponement. A year later and as an ode to Bodecker, the Sandy ZoomX Bruin modernizes the sneaker more than it or any other SB silhouette has ever seen.

ZoomX cushioning is Nike’s most advanced lightweight foam material, and together with a carbon fiber plate it provides an incredible amount of return. And as another nod to Bodecker, the upper’s fish scale-like Primeknit pattern is done up in the colors of a portrait of him that hangs at the The Bodecker Foundation in Portland. Together with seafoam green accents and an oversized Swoosh that runs underneath the translucent midsole, these details also make for one of Nike SB’s most striking releases ever.

The Sandy ZoomX Bruin will release in limited quantities in Tokyo this summer, and chances are we’ll see Nike SB’s skaters wearing it in competition. No details for a wider release have been announced, so here’s hoping skaters back stateside will be able to get their hands on the most innovative sneaker to come to the sport.