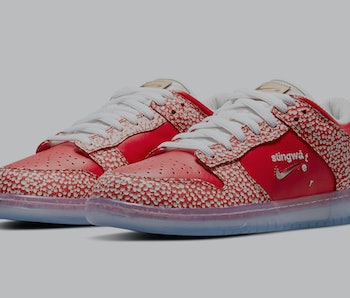 Nike SB is known best for its creative collaborations, and its latest model is no exception. The Swoosh has teamed up with Stingwater, the skate brand of Korean-American skater Daniel Kim, to release an upcoming SB Dunk Low. Inspired by Stingwater’s central motifs like mushrooms and mythical properties, the new sneakers boast a bright red color speckled with white dots, finishing off the look with blue translucent soles.

The Dunk Lows were first teased by Kim in a Stingwater skateboarding video dubbed “PAID 2 SK8.” Seen on-foot as Kim performed tricks in a skatepark, it’s clear the shoes were made for OG SB fans — not the hypebeasts who only follow the silhouette because of Travis Scott. But thanks to the latter driving up demand for the shoe, Kim’s silhouette will most likely be subjected to a SNKRS lottery-based draw, leaving everyone’s sneaker future up to fate.

Funky fungi — That said, Kim has made sure to leave his mark on the upcoming design, lest someone forget its roots. Sporting a striking red leather upper, the Dunk Low features contrasting white speckles on its overlays, mimicking the top of a mushroom. Taking this into account — on top of Stingwater’s history of “mischievous graphics and unconventional taglines” — SNKRS has dubbed this Dunk “Magic Mushroom,” and outfitted the inner lining to mimic the gill of a mushroom. Green insoles nod to Stingwater’s branding by reading, “Please don’t step on me, I’m trying to GROE.”

Furthering the funky theme, Nike’s Swoosh has been shrunken down to miniature size and dressed in a translucent white. Stingwater’s logo accompanies the Swoosh branding, with letters cascading down the side panel of the shoe. Mixing up branding even more, embroidery on each heel tab inverts Nike’s signature wordmark, while additional stitch-work behind each tongue advises the wearer to "empty your mind" in search of new perspective.

To call back to older Dunk models — notably the 4/20 Dunks — the sneakers include a hidden stash pocket for discreet storage of equally magical goods. The remainder of the shoe keeps its design pretty clear, though, with the tongue sporting a completely translucent panel and the outsole made of an icy blue translucent rubber. Underfoot, the outsole reads “Plant Emoji With Eyes,” to nod to Stingwater’s logo.

As mythical as a W on SNKRS — Of course, the mythical sneaker might as well be fictional. With Dunk demand at its peak and the shoe’s throwback features, Stingwater and Nike SB’s “Magic Mushroom” is sure to be coveted by hypebeasts, skaters, and genuine fans — perhaps making this fungi the most foraged for.

Releasing May 10 at 10 a.m. ET, the magical shoe will drop in a less enchanted fashion — on SNKRS — and will probably be distributed via draw. Those lucky enough to be selected to purchase can expect to pay $125 for a pair — or face rising resale prices for the limited edition Dunk Low. Unfortunately, there’s not mushroom for all of us.