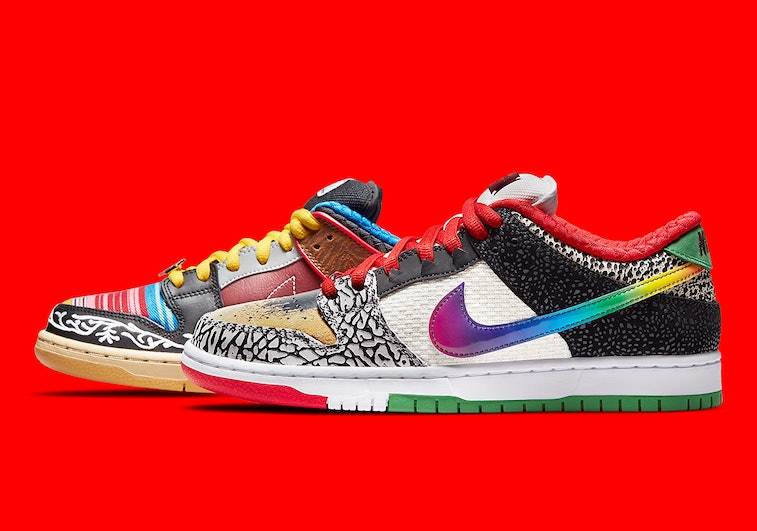 Nike’s “What The” series has made a hodgepodge out of a variety of sneakers, and Paul Rodriguez is about to get one of the wildest ones yet. Official images have finally surfaced for the Nike SB Dunk Low “What The P-Rod,” which crams in a cluster of details inspired by the professional skater.

No element is like the other on the mismatched pair of Dunks, which most notably includes several nods to Rodriguez’s Mexican heritage. The left sneaker’s outsole features the colors of the Mexican flag, while the right shoe’s toe cap invokes traditional serapes. But those are only the beginning of the rich details for P-Rod’s latest sneaker, which will give the original “What The” SB Dunk a run for its money among collectors.

Zooming in — Prints on prints on prints define the pair of sneakers, which are almost overwhelming just to look at. Among them is the elephant print made famous by the Jordan 3, as well as a quilted “PR” motif similar to luxury handbags. A rainbow gradient Swoosh on the right sneaker’s lateral side is one of the first places your eye goes, and when you look close you’ll be impressed by how no one component is like the other shoe, let alone the other side of the same one.

Even the lace dubraes are mismatched, and each of the eyelets features distinct construction. On the heels, you’ll find the Nike logo on the left mustache contrasting with Rodriguez’s signature over rainbow stripes on the right. Everyone is likely to have their own favorite element of the shoe — and outsiders who see you wearing it are all but guaranteed to think, “What the...”

We’ve got some release details — As of now, skate shops across the country are the only confirmed places to buy the “What the P-Rod” Dunk. They’ve been given the green light to drop the shoe May 22, and each shop will handle the release as it sees fit. Your best bet to land a pair is to check up on your local skate shops to see who gets stock and how you can enter for a chance to win.

A release through the SNKRS app may also be imminent, but Nike SB does have a history of giving Dunks exclusively to skate shops as a show of support for the culture. Do the homework to see how you can get a pair IRL, because another shot isn’t guaranteed.