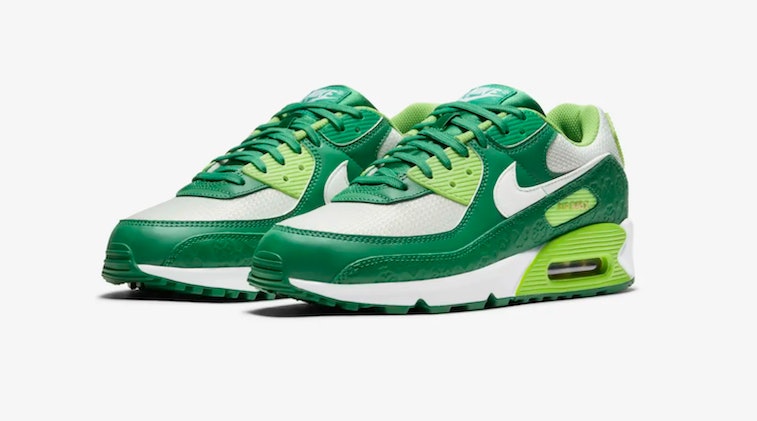 It’s hard to cop a pair of Nike’s holiday-themed sneakers, but this St. Patrick’s Day, you might just get lucky. The brand revealed very green iterations of its Air Max 90 and Air Force 1 silhouettes to celebrate the holiday. With gold details and debossed four-leaf clovers, the two sneakers are destined to be hits — especially considering how much we all need a little luck right now.

As we saw throughout Valentine’s Day season, Nike loves transforming its classic silhouettes into themed iterations. February saw the release of a heart-laden Air Max 90 and multiple lovely Air Force 1 sneakers as consumers raced to cop a gift for their special someone (or themselves). While St. Patrick’s Day may not be as widely celebrated as Valentines Day, it’s possible we could see other Nike silhouettes debut in lucky renditions, especially considering the similarities between the existing designs.

All green, all good — Just as anticipated, both the Air Max 90 and Air Force 1 sneaker come dressed in celebratory green shades. Darker hue “Pine Green” is featured on the shoes’ tongue and overlays, while hits of “Mean Green” can be seen throughout the branding.

True to its silhouette, the AM90 sports a white mesh upper, contrasting its colorful overlays. “Mean Green” accents the sneaker’s inner lining, lace tabs, heel tabs, and MaxAir window, while its Swoosh remains white. The shoe’s white midsole follows suit, contrasted by a “Pine Green” outsole. A subtle hit of gold is seen on the Air Max lettering as well as the insole logo.

What connects the Air Max 90 to its accompanying Air Force 1 is their shared debossed shamrock detail. Appearing on the AM90’s mudguard and the AF1’s heel overlay, the imprinted four-leaf clovers come dressed in darker green.

Unlike its Air Max counterpart, however, the Air Force 1 sees “Mean Green” on its toebox and Swoosh, while “Pine Green”' takes over its overlays, tongue branding, heel branding, midsole branding, and outsole. A white midsole and midpanel help to break the shoe’s theme up.

At the end of the rainbow — No matter which silhouette you favor, each sneaker’s thematic details will leave other consumers green with envy. That is, if you’re lucky enough to score a pair. Nike confirmed it would release the Air Max 90 via its SNKRS app on March 12, retailing at $130. The brand has yet to decide a release date for the accompanying Air Force 1, but it’s expected to drop in March. Let’s hope it’s easier to catch than a leprechaun.