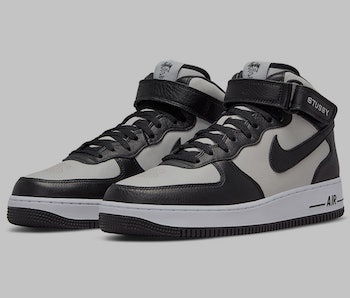 Nike’s Air Force 1 is turning 40 next year and it looks great for its age. The Swoosh is celebrating one of its most iconic silhouettes with the help of one of its long-term collaborators: Stüssy. Teased earlier this month in a black and a white style, new official images are showing that the duo’s AF1 is getting a gray treatment, as well.

Nike and Stüssy’s nearly 22-year partnership has resulted in some of the most sought-after makes and models in footwear, from the Air Huarache LE in 2000 — and 2021 — to the Air Force 1 “Fossil” and Air Zoom Spiridon Cage 2 in 2020. Stüssy is known for its minimal yet timeless design direction, making Nike’s sneakers such a great canvas.

A touch of gray— The latest AF1 looks similar to its “panda” partner but swaps the white for a clean gray shade on the toe boxes and quarters. Nike forfeits its traditional branding on the velcro straps and tongues to make room for Stüssy’s embroidered and scripted name, respectively. An interlocked SS logo perforates the toe boxes for more of the West Coast label’s branding, finished off with metal badges on the heels. As for the base, the shoe sits on a traditional white midsole and black outsole.

Nike and Stüssy are celebrating in more ways than one as an all-black iteration was revealed a few weeks ago as well. In that version, the dark uppers and outsole are interrupted by white Air cushioning for a similar but updated version of the ‘07 AN20.

With the new gray coming into play, Stüssy is staying on brand with the palettes and tasteful details, opting to let Bruce Kilgore’s original design do all the talking. For a little something special, Nike and Stüssy are wrapping the pair in special tissue paper, presented in a festive red and beige shoebox.

Nike and Stüssy’s Air Force 1 still doesn’t have a release date yet. It’s safe to assume a drop early in the year, but with these two, we know nothing’s black or white. There’s clearly some gray area, and all these upcoming AF1s are pure example of that.