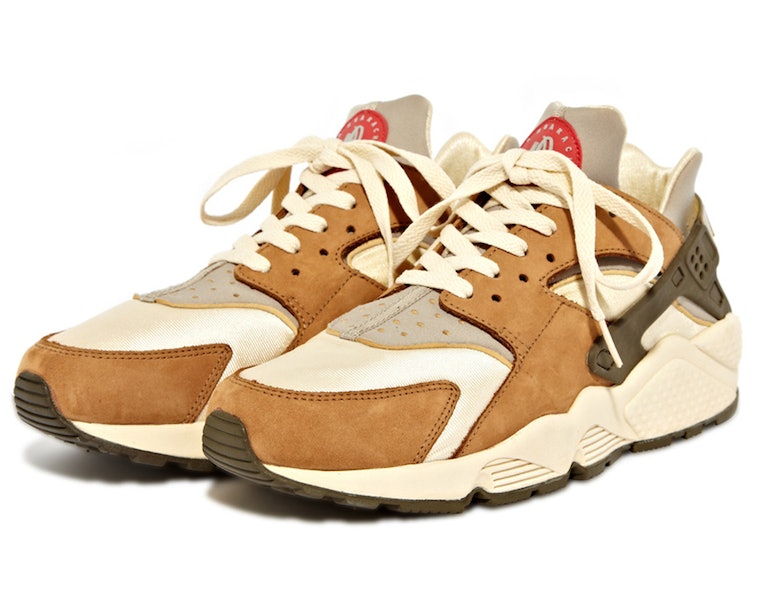 Stüssy's history of collaborating dates back to 2000, when it released two versions of the Air Huarache exclusively in its London flagship store. The formula was simple when compared to today's landscape of collaborations: apply new color schemes to the snug and lightweight running sneaker.

Stüssy opted for a tonal-brown that would repeat itself on the Dunk High a year later, as well as a muted yellow and green makeup. There were no Stüssy logos or design alterations, just clean color schemes as imagined by Michael Kopelman, an original member of the Stüssy tribe. Not only was it Stüssy's first Nike collab, it was also Nike's first of the new millennium.

These Air Huaraches from the nascent days of sneaker collabs are set to return, as seen in the lookbook for Stüssy's spring / summer collection. It appears that Stüssy is running the kicks back as is, with no visible deviations 21 years later. They're a far cry from what Stüssy does today — just look at the hemp Air Force 1s and the follow-up hand-dyed versions as an example — but they provide a chance to dig deep into sneaker history and appreciate one of the most difficult Stüssy sneakers to find.

The Huarache was a game-changer — Originally released in 1991, the Air Huarache was designed by the legendary Tinker Hatfield. The Swoosh took a back seat to the visible technology, which included a neoprene upper pulled from water skiing.

A test run of the shoes was sold at the New York City marathon, and enough runners scooped 'em up for Nike to go ahead with a proper release. One of the ad campaigns included the tagline "Have you hugged your foot today?" — emphasizing a snug fit that was novel long before Flyknit became commonplace in Nike's sneakers. The combination of lycra and neoprene would help make the Air Huarache one of Nike's most influential sneakers ever.

Numerous Huarache models released in the time between the Air Huarache's debut and Stüssy's collaboration, including several silhouettes designed for basketball. When Nike hit up the seminal streetwear brand to collaborate for the first time, Kopelman was allowed to choose his favorite running shoe to remix — and it was the nine-year-old Air Huarache that he picked.

When are Stüssy's coming back — According to Sneakernews, the "Desert Oak" Air Huarache is set to release February 12, while the drop date for the "Dark Olive" has yet to be determined. If Nike and Stüssy stick with their usual formula, you'll have two chances at the shoes with separate release dates on the two parties' respective platforms.

Getting Stüssy's reissued Air Huarache still won't be easy, but you'll have much better odds than trying to track down one of the originals.