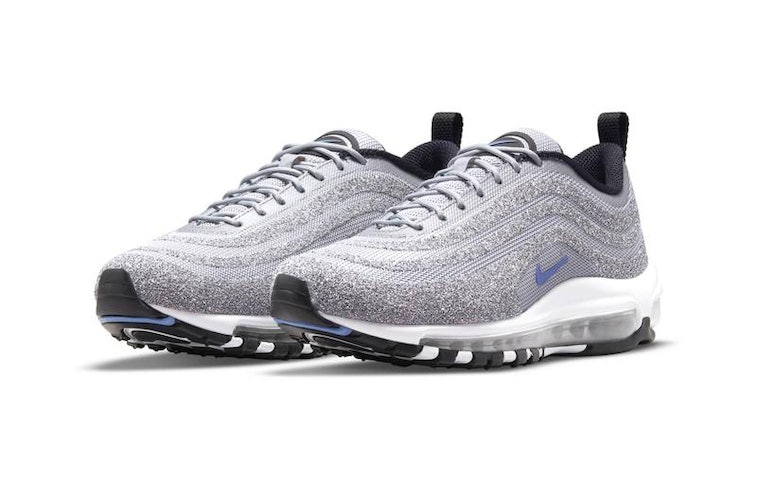 With vaccines rolling out, people are ready to party this summer — and now, you can have shoes to match the vibe. Nike plans to release a new iteration of its Air Max 97 that basically looks like a disco ball, as it’s coated in Swarovski crystals. The sparkly women’s sneaker drops this month, but will cost you about three times as much as a usual AM 97 silhouette.

Believe it or not, this isn’t the first time Nike has released a crystal-covered sneaker. Back in 2017, the brand dropped its first Swarovski Air Max 97, which came in a similarly silver-based shade. The OG sneaker saw red accents instead of icy blue ones, though, and we have to say we prefer the latter.

Fancy footwear — Other than the slight color change — which is only visible in the shoe’s side Swooshes, outsole, and tongue Swoosh — this new Air Max 97 stays loyal to its original 2017 design. Crystals aside, the sneaker sports a metallic silver mesh upper, with a matching tongue and silver laces. A chunky white midsole reminds wearers of the classic silhouette they’re wearing.

On top of the silver mesh, rows of crystals sparkle across the entire upper. In Nike’s 2017 marketing for the Swarovski Air Max 97, it boasted that the shoe used a total of 55,690 individual crystals to complete the look, and while Nike hasn’t announced the exact number used for its updated iteration, we imagine it’s just as many crystals given the design stays true to its past version.

Nike’s spellout logo doesn’t appear on the shoe thanks to its recognizable Swoosh. Silhouette branding is visible on the sneaker’s black heel tabs, though, reading “Air Max” in all lowercase letters.

A lot of flash and cash — While the crystals are eye-catching, the most baffling part of this Air Max 97 might be its price. Thanks to its sparkly upper, the women’s style will run you $400 — so maybe you’re better off not wearing a pair to any ragers, lest you damage the sneaker or worse, lose some crystals.

Here’s the good news: If you are planning on dropping that kind of coin on sneakers, you can probably score this pair. Although the Swarovski-covered shoe is dropping on SNKRS, it won’t be subjected to a draw like some of Nike’s other styles, and demand will be much lower thanks to the Air Max 97’s price tag. Where you’ll wear this style, though, I’m not sure.