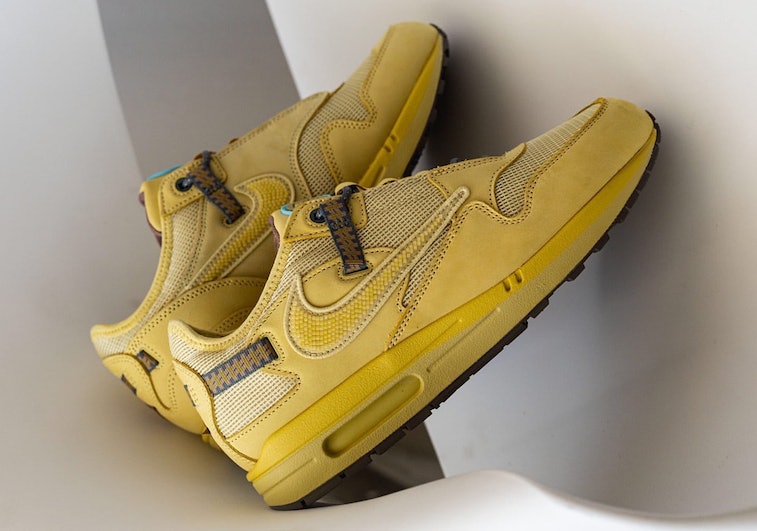 “Wheat” is one of five color schemes coming from the Cactus Jack Air Max, boasting a tonal yellow palette with details in Scott’s signature brown. The Air Max 1’s iconic silhouette is noticeably slimmer with outdoor-inspired elements: a mesh upper, treaded outsoles, and round boot laces. Then, of course, there’s the backwards swoosh. The sunny yellow hue makes a lot more sense with its original spring release date, and is definitely an aesthetic outlier compared to Scott’s usual neutral palette.

Overkill? — This puts Travis Scott’s Nike collaborations in the double-digit range for 2021, and we’re only eight months into the year. That count doesn’t even consider his teased collaborative pairs, which have become an almost weekly occurrence. In the week after his Air Jordan 1 Low collaboration with Fragment, Scott hinted at two co-signed Nikes: he was papped in a never-before-seen tonal Air Trainer 1 Mid, and later teased an animal print Air Jordan 1 on his Instagram story.

There is a chance some of these leaked pairs are gifts or one-off experiments with Nike. But considering Travis’ unending ability to cut a check, and the flocks of fans and resellers who keep the demand (and exclusivity) of these collabs at an untouchable high, it wouldn’t be surprising if he had years’ worth of pairs backlogged. Travis Scott is undoubtedly one of Nike’s most profitable, and consistent, collaborators — but you’d think the hype would die down once a collab becomes almost too frequent to keep tabs on. While there’s no guarantee that any of Travis’ leaks will come to retail fruition, there will always be another Cactus Jack swoosh on the way, and soon.

Good luck — As usual, the details of this drop are few and far between. The Air Max 1 “Wheat” is rumored to release before the end of 2021, and price out at $160. However, if there’s one thing that’s guaranteed with any Travis collab, it’s the almost impossible odds of copping them firsthand. The drop details, arguably even the look of the shoe, are irrelevant at this point — if you want to invest in a backwards swoosh, you’d better start saving for the sky-high resale prices now.