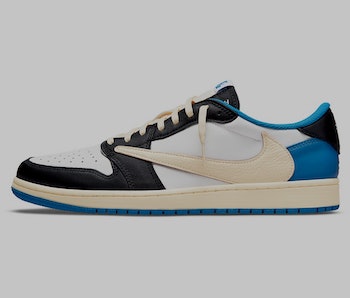 Travis Scott and Fragment’s long-awaited Air Jordan 1 arrived last week with little time to prepare for, and you easily could have gone into the weekend not knowing they had already dropped and sold out. Fortunately, there’s always another sneaker right around the corner to hone in on as the next so-called “must cop” — but we didn’t expect the three-way collaboration to produce another so quickly.

A new Air Jordan 1 Low is set to follow the lead of its high-top cousin, utilizing a similar blue, white, black, and cream color scheme. The primary difference, besides the change in profile, is in black replacing white for the tip and eyestays. Fragment’s logo and Scott’s weird smiley face are once again debossed in the heel, while the Air Jordan 1 Low’s mustache leaves room for even more brand iconography.

Because the Air Jordan 1 Low is nowhere near as venerated as the sneaker in its original form, it’s hard not to look at the forthcoming release as a lesser consolation prize — if you can even get it, of course. The slightly different color scheme, however, does make the Low feel slightly less phoned in than the High, which was criticized for simply slapping on new colors and logos to Scott’s Air Jordan 1 from two years prior.

There’s more merch, too — Just like its predecessor, the Air Jordan 1 Low will be released along with another apparel run, albeit one much smaller and simpler. A hoodie and T-shirt will both release with the same graphic arrangement, which sees an image of Michael Jordan given the appearance of having been vandalized by a brand-loving child.

Sweat shorts will also release sans-Mike and with two rear pockets that aren’t always guaranteed when you’re talking about athletic apparel. We’ll see neither the same volume of merch from last week nor as, umm, involved graphics — and it’s hard to say if one approach is better than the other. We’re not exactly talking about the most high-minded of apparel here, but there’ll be a rabid audience awaiting it nonetheless.

Both the Air Jordan 1 Low and accompanying apparel are set to release August 13 through the SNKRS app and other retailers that have yet to be announced. The kicks will set you back $150, while the merch runs from $50 to $120. Even if you strike out again, at least you can say you had time to prepare for the second Travis Scott and Fragment release in three weeks.