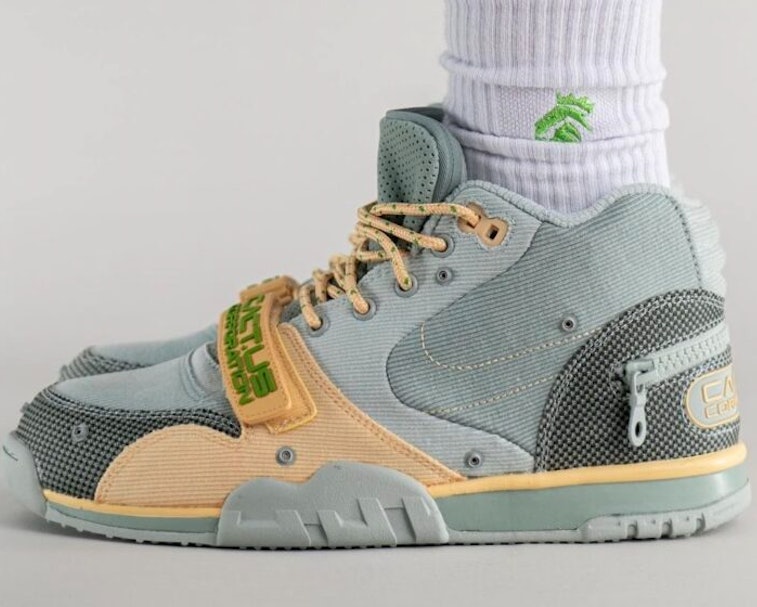 It looks like Travis Scott’s upcoming Nike collabs are back to their scheduled programming. The rapper’s Nike Air Max 1 and Air Trainer 1 were both put on hold following the tragic Astroworld disaster that left 10 people dead, others injured, and millions of dollars in lawsuits in its wake.

The delayed (not canceled) release — an equivalent of a slap on the hand in the sneaker world — was enough of a reprimand for Nike, which said on the SNKRS app the decision was “out of respect.” However, the money tree must be watered, thus the two sneakers are back in motion, both slated for release later this month.

“Baroque Brown” and “Saturn Gold” will dress the upcoming Air Max 1s, while a darker brown and light gray will coat the Air Trainer 1 Mids. Reversed Swooshes appear on the outdoor-aesthetic Air Maxes, and there are still three other pairs of Air Maxes that could potentially hit the shelves. As for the Air Trainer 1 Mids, many of the original features of the ‘90s sneaker are still present, including the removable sheaths and zippered pockets at the heel, but “CACT.US CORPORATION.” takes its place on the Velcro strap and heel branding.

Does everyone deserve a second chance? — It’s not easy to separate an artist from their products, or else Yeezys wouldn’t be a $5 billion sneaker line and Adidas would’ve ended its partnership with Ye long ago. Dior did postpone its Travis Scott collection, Fortnite removed the rapper’s emote, and even his spiked seltzer is extinct. But because Nike is one of the first (and biggest) names to resume its partnerships with Travis Scott, this could mean the rapper is making a slow return.

Is everyone on board? Not exactly. Alisha M. Brown, an educator and researcher, took to Twitter to call out her disappointment with the sneaker community and its “obsession with problematic men,” namely Travis Scott. “Why can’t y’all let him and his shoes go?” she asks. “Do y’all just not care?” Other fans of the rapper are happy to see his comeback, filling up private Coachella venues during his first appearance on-stage since Astroworld.

These first four pairs of Air Max 1s and Air Trainer 1s will be available for $160 on May 27 via SNKRS and select Nike stockists. This could very well be the first of many Travis Scott sneakers Nike will take out of the vault, so keep an eye out.