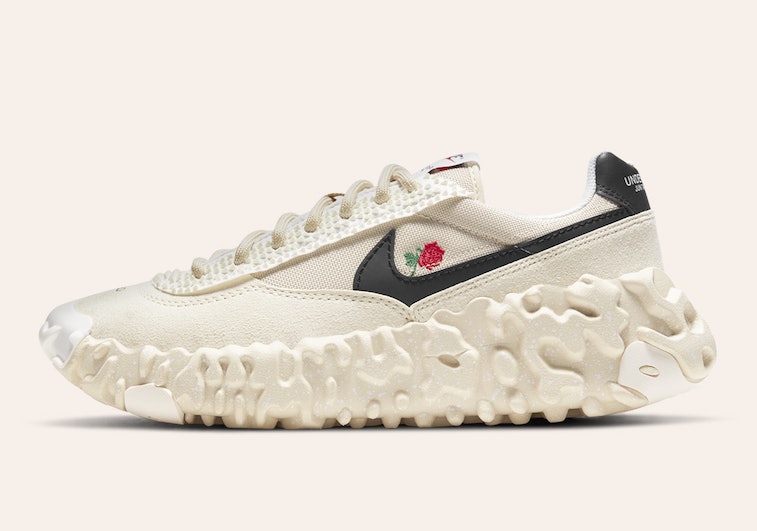 Undercover's Nike collaborations are as consistent as they get, including the Gyakusou running line, and yet for some reason, they're largely free from the hype that defines sneakers. Nearly all of the Japanese brand's releases from the last three years can be had for less than retail on the resale market — and all signs point to its next sneaker slipping under the radar as well.

The Nike "Overbreak," first released as part of the bonkers ISPA line, gets a clean "Sail" color treatment and a charming rose embroidery under Undercover's stead. A flashier black version with a metallic silver Swoosh will release alongside it, forming a strong duo that should be relatively easy to cop.

The rose motif carries over from the Gyakusou Zoom Pegasus 36 Trail, a 2019 release that can still be had for dumb cheap on platforms like StockX. But the best detail of all is easy to overlook — and it's been placed specifically for the wearer's eyes.

A lil' yin and yang — The left and right toe are stamped with "Chaos" and "Balance," respectively, and are oriented to be read by the wearer instead of onlookers. Perhaps the unusual placement can serve as a reminder to maintain harmony when you're wearing it — or maybe it'll just make you smile because only you can read it with ease.

Duality also defines the Overbreak itself, with a chaotic midsole standing in stark contrast to the soft suede upper. There are a lot of great textures going on here, including mesh around the Swoosh and an eyestay with raised bumps. All of the distinct materials are more easily appreciated on the creamy "Sail" version — while the black and silver one puts more emphasis on its Swoosh and mustache.

Undercover and Jun Takahashi branding appears throughout and subtly on the mustache, tongue, and insole. A red Swoosh also appears on the latter two and coordinates well with the roses for just a dash of color.

Stay tuned for the release — Pricing has yet to be announced, but the Undercover Nike Overbreak has been confirmed for a February 19 release in Europe. A Stateside drop should follow some time afterward, but I wouldn't fret. Previous Undercover collabs have sat on shelves for months, and it may even be worth it to wait for resellers to cut their losses and start selling at a discount.