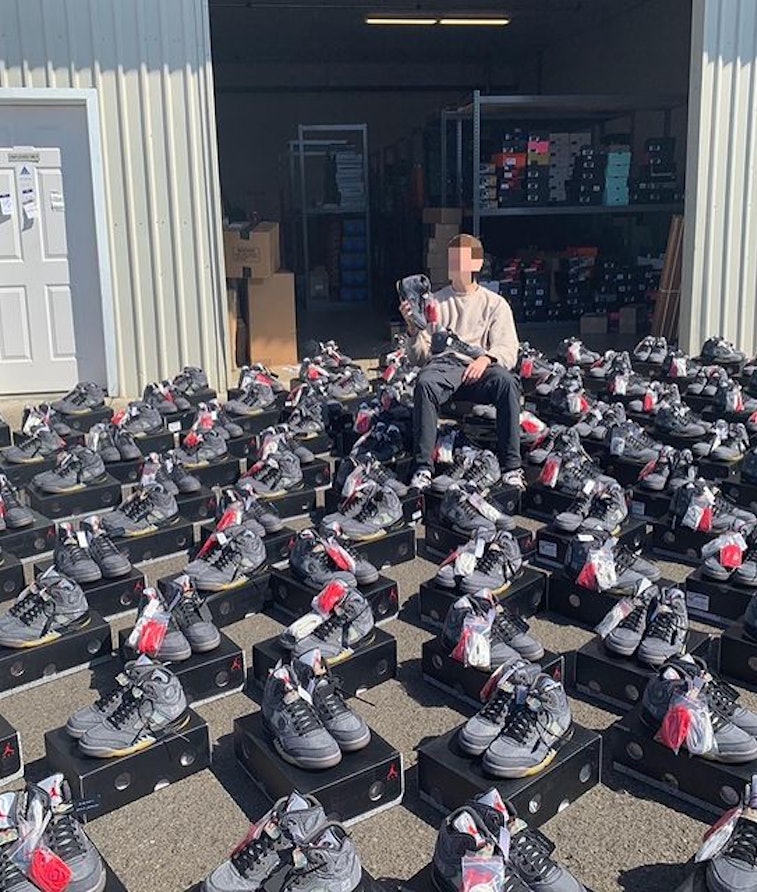 "Do Not Resell." That's the first line in the terms of service for Swoosh, the online store reserved for Nike employees, where they can buy products from the brand at up to 40 percent off.

"Items purchased on Swoosh may NOT be resold, either directly or indirectly, in any manner by any Swoosh user," the terms read. This includes, "Re-selling NIKE merchandise through Internet auction sites, flea markets, garage sales, or any other type of personal business transaction." From the get-go, even on a site that's all about perks, Nike makes it clear it doesn't want any of its workers to resell its products. This also applies to family of employees registered to use the Swoosh benefits, who are only allowed to purchase items for themselves or as gifts for others. Simply put, reselling Nike goods is an activity the company frowns upon, especially when it involves its employees or members of their immediate families.

And yet, when now-former vice president and general manager of Nike North America Ann Hebert disclosed to the brand that her teenage son, Joe, was running a sneaker reselling business, it didn't seem to have a problem with it. That happened in 2018, the same year the limited liability company "West Coast Streetwear" was established by Pascal Hebert, Ann's husband and Joe's father. Then, on July 30, 2019, the LLC's registration was transferred over to Joe Hebert, who the year before was underage, and thus by Oregon law couldn't legally register the company is his name originally.

The day prior, on July 29, Joe Hebert seemed to celebrate with a photo on Instagram that was captioned "Just the start," which showed him posing in front of dozens of stacks of shoes — including, of course, boxes of Nikes and Air Jordans.

"There was no violation of company policy, privileged information or conflicts of interest, nor is there any commercial affiliation between WCS LLC and Nike, including the direct buying or selling of Nike products," a spokesperson for the sportswear giant told Bloomberg Businessweek, which first wrote the story on Joe Hebert's sneaker venture — one he touted as bringing in as much as $600,000 a month.

Nike's statement that its former VP hadn't violated any rules came despite the report that the American Express corporate card for WCS LLC was under her name, a fact Businessweek only found that out by accident after her son Joe wanted to show a statement to prove how much revenue his company was making. Even if Ann wasn't the one physically buying the sneakers Joe was reselling, this ties her directly to the operation he was running. And when you look at Nike's internal code of ethics, some former employees say it's difficult to understand how the company didn't see any red flags in Hebert's family ties to reselling its products.

In the Nike code of ethics that was in place in 2018, which employees refer to internally as "Keep It Tight" (a play on the brand's "Just Do It" slogan), there's the stern indication that employees must not be involved in any secondary business that may lead to any sort of personal gain, and that extends to family. "NIKE recognizes and respects the rights of employees to take part in financial, business, employment, or other activities outside of their NIKE jobs," the document states. "However, these activities must be lawful and free of any potential conflicts with employees’ responsibilities at NIKE. Conflicts of interest arise when an employee uses his or her position at NIKE for personal gain or when the employee’s personal interests conflict with NIKE interests."

Nike's code of ethics goes on to say: "All employees must avoid any actions or relationships that could conflict with, or appear to conflict with, the interests of NIKE. For example, having a substantial investment or position in any business that deals with NIKE, doing NIKE business with close friends or relatives, supervising family members, relatives, or those with whom you are romantically involved, using NIKE’s name or reputation to gain personal favors, and accepting or offering payments, gifts or favors from or to companies doing business with NIKE are situations that could result in an actual or the appearance of a conflict of interest."

“Avoid any actions that are at odds, or could appear to be at odds, with the interests of Nike.”

The company adds that "as a NIKE team member, through the use of NIKE property, information, or position you may learn of business opportunities that may be of benefit to NIKE," employees "should not take such opportunities to benefit yourself or others, and you should never compete with NIKE." Although Nike has since updated the language of its code of conduct, the gist of its conflicts of interest section remains the same: "Avoid any actions that are at odds, or could appear to be at odds, with the interests of Nike," which appears to contradict its stance on Hebert's link to a sneaker reselling business that was being run by an immediate family member.

Nike's latest version of its code of conduct does add a key line: "Potential conflicts can often be resolved with an open and honest discussion. Remember: having a conflict of interest is not necessarily a violation of our Code, but failing to disclose it is." As we now know, according to Nike, Hebert did disclose her son's WCS LLC to the brand. But it is still unclear to many how Nike came to the conclusion that it was acceptable for someone in her position to have any sort of involvement (direct or indirect) in a venture the primary goal of which was reselling Nike products at a markup.

Aside from Ann Hebert owning some part of West Coast Streetwear's banking, there hasn't been any other proof that she was benefitting directly from the business, although her son Joe made it abundantly clear that his connections in the sneaker industry were crucial and played a major role in helping him achieve success.

"If you know the right people here, this is the city to sell shoes,” Joe Hebert told Businessweek during one of his interviews, noting that the "right people" could "give you access to stuff that, like, a normal person would not have access to." According to the publication, Hebert insisted that his mom "was so high up at Nike as to be removed from what he does, and that he’d never received inside information such as discount codes from her." Joe's digital footprint tells another story, though, as he would often post pictures on Instagram where he could be seen carrying dozens of Nike shoes in bags from Nike stores — the same stores where employees, and family members who are on guest lists, can get discounted items.

It's also telling that shortly after it was discovered he was related to Ann Hebert, Joe cut off all communications with Businessweek. Hebert, who had been at Nike for 25 years, resigned from the company days after her son's business came to light. In a statement, Nike said, "Ann Hebert made the decision to resign from Nike," though it did not answer any follow-up questions we had. That included questions about whether her resignation was directly tied to the report that exposed her ties to a sneaker reselling business, and whether Nike was still standing by its original statement that she had "no conflicts of interest."

Input spoke to several former Nike employees, who asked to remain anonymous, about the company's rules on insider reselling. They said that it was "common knowledge" at the brand that employees aren't allowed to use their discount to resell product, and that any sort of reselling from an employee "could lead to potential HR violation." Some of the people we talked to said they knew this included family members, while others were "personally unaware" of this, despite Nike's code of ethics and its Swoosh buying terms outlining that detail.

Many of the former employees also echoed the sentiment that others at the company had been fired for way less than what's now known about Ann Hebert and her son, but they weren't surprised since higher-ups at Nike tend to play by different rules.

"That's so clearly all over her house," one source said about the pictures of Nike shoe boxes Hebert's son would post on social media. "I want to barf. It's so insulting." Another source said, "It was understood, for sure, that you or your family can't profit off the company," adding that employees at other Nike offices across the U.S. had been fired for reselling products.

Still, not every person we interviewed who used to work at Nike agrees that Ann or Nike committed any wrongdoing. "It's definitely a gray matter since it sounds like no Nike employee was directly involved," a source told Input. "If a Nike employee wasn't providing insider information or directly purchasing product, then maybe there were no rule violations. That may be poor judgment, but not certain that's a violation."

“It was understood, for sure, that you or your family can't profit off the company.”

Another former Nike employee said if Joe cracked the formula to unlock "the multi-billion dollar sneaker resell industry and was deploying bots and just taking advantage of it, then I'm not sure she had any obligation to tell him to stop making $100,000 a month." That said, the source added, "If she helped him and literally handed him her Nike corporate credit card to make his purchases, then OK that's a major conflict and she probably deserved to be fired as soon as the 'ties' were disclosed."

Regardless, the optics from this situation don't reflect well on Nike, particularly since the company is already dealing with other controversies tied to sneaker reselling. Just last month, Nike faced backlash due to the botched launch of its Air Jordan 1 x Trophy Room "Freeze Out" sneakers, which frustrated consumers after pictures of resellers stockpiling the shoe before it even dropped were seen all over Instagram and Twitter. To make matters worse, the Trophy Room boutique tried to hold a raffle for the highly coveted pairs on its site, but that turned out to be a disaster, as many would-be buyers were met with page and server errors.

"We remain committed to serving our consumers with authentic Jordan products through Nike.com, and our strong distribution network and channels in both online and at brick-and-mortar retail," Nike said after the release of the Air Jordan 1 collaboration with Trophy Room, which is actually owned by Michael Jordan's son, Marcus. Since then, Marcus Jordan has become known among sneakerheads as Marcus "Backdoor" Jordan, a moniker intended to address the practice of selling pairs of shoes to friends and family before their official drop date.

The case of Ann Hebert, who did not respond to Input's request for comment on LinkedIn, is a tricky one: It's not about whether her son should be able to exercise his entrepreneurial skills, but instead a question of just how much her role at Nike might have advanced his business and what, exactly, her involvement was. Based on the company's conflicts of interest guidance, it's hard to imagine how it didn't see any violations stemming from Hebert's link to West Coast Streetwear, sources said.

There are additional lingering questions for Nike, which did not respond to Input's request for comment in time for the publishing of this story: If the brand was indeed letting people in lower roles go for potentially less serious offenses, why did Hebert receive special privileges and exceptions? And why was she allowed to continue in her role or, at the very least, told that her son's operation went against Nike's code of ethics? And if, as Nike claims, there were no conflicts of interest or violations, why did she suddenly depart from the company after WCS LLC was unexpectedly put under a microscope?

"Ann managed the largest geography at the company," a former Nike employee said. "She absolutely would have to toe the line on everyone NOT doing this [reselling]."