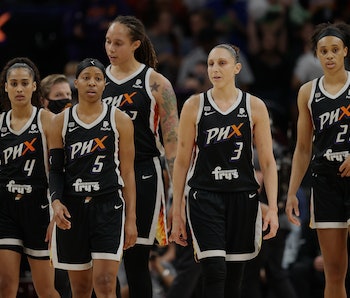 The WNBA has raised $75 million in funds from a group of equity investors that includes Nike, retired NBA players Baron Davis and Pau Gasol, and former U.S. Secretary of State Condoleezza Rice.

The funding round is a first for the WNBA in its 25-year history and values the league and its 12 teams at $1 billion. Intended to accelerate the WNBA’s growth, the fundraising has been described in a press release as “the largest-ever capital raise for a women’s sports for a women’s sports property.”

“We’ve all seen the reports that less than 5 percent of all sports media coverage and less than 1 percent of all sponsorship dollars go to women’s sports,” WNBA commissioner Cathy Englebert told CNBC. “Access to this capital … when you’re trying to grow a business is really going to help us move the needle.”

Viewership for the WNBA’s 2021 season increased 49 percent compared to the year prior, according to ESPN, while ratings for the Finals were at their highest since 2017. Englebert says the league plans to expand itself digitally and in the global market while also leaning into growth in sports betting.

Nike’s role in the W — Nike has been the jersey sponsor for the WNBA since 2018, a year after it also gained rights to outfit the NBA. In its own release, the company says it plans to use the partnership to deepen its storytelling for the league and its players, as well to initiate more grassroots opportunities to get young girls playing the sport.

The sportswear giant has a small track record of giving signature sneakers to WNBA players, although it’s a significantly more rare phenomenon when compared to the NBA. Nike hasn’t created a shoe specific to a WNBA player since 2006, when Diana Taurasi played in the Air Taurasi. Prior to Breanna Stewart inking a new deal with Puma last year, no WNBA player had their own sneaker in the 10 years since Candace Parker's Adidas Ace Commander and Ace Versatility. In 25 years, Nike has awarded models to just five players other than Taurasi, including Sheryl Swoopes and Lisa Leslie.

Hopefully, Nike’s new stake in the WNBA means that it’ll end its long drought of signature players and even increase its commitment to bringing more flagship sneakers to the league. Shoes are one of the best avenues for telling stories in the NBA, and for the women’s league it’s no different.