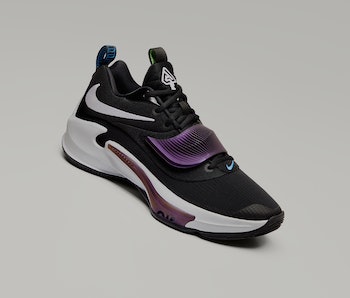 In the midst of a playoff run that may just end in his first championship, Giannis Antetokounmpo is getting his third signature sneaker. The Nike Zoom Freak 3 marks the biggest shift for his still-young line, with a retooled upper that shrinks down the backward Swoosh and the first strap to feature on one of his sneakers. What you can’t see, however, is where the most important changes have been made.

Two Zoom Air units underneath the ball of the foot are intended to absorb energy and provide responsiveness, as the Zoom Freak 3 focuses on Antetokounmpo’s lightning-quick downhill game. Continuing as a low-top, the strap helps lock down his foot — a necessity for someone as bewilderingly quick as the Greek Freak is for his size.

“One of the hallmarks of his athleticism is transferring energy quickly from leg to leg to maneuver his body through gaps,” Ross Klein, senior creative director for men’s performance footwear at Nike, said in a release. “Giannis works his foot like a gas and brake. He also works all different angles of his foot as he’s driving to the basket, so we wanted to contour the design to fit the way he transitions from step to step.”

All about the Euro — Nike specifically mentions the Euro step, one of the most lethal moves in Antetokounmpo’s arsenal, in how it’s tooled the low-to-the-ground profile for the Zoom Freak 3. The wavy traction pattern on the outsole is matched by the texture of the strap, which is the lone source of freakiness on the all-business “Project 34” color scheme.

Launching alongside the black and purple version will be a much bolder orange sneaker with a wavy upper to match. Both the strap and the swooping midsole panel are rendered in a marble blue reminiscent of the Cosmic Unity, one of our favorite new sneakers of the year.

Elsewhere in Nike’s basketball lineup, Kevin Durant’s 14th signature sneaker brought back its strap for the first time in seven years, which may just be the beginning of a revived trend for performance hoops sneakers. We’ll see if that ends up being the case in August, when both color schemes of the Zoom Freak 3 release in America. The rest of the world is up first, though, with a global release slated for Thursday, July 1.