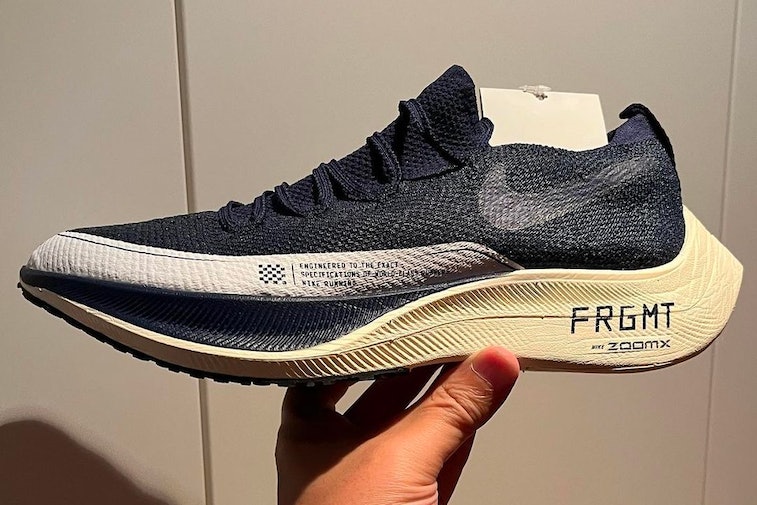 Fragment Design founder Hiroshi Fujiwara has become a master of leaking his own shoes, and it seems a Nike by You Zoom VaporFly NEXT% sneaker is next on his roster. The designer took to Instagram to share a photo of his next Nike collaboration, made more apparent by Fragment branding at the back of the shoe’s sole unit.

Prior to his debut of the Zoom VaporFly NEXT%, Fujiwara was working on multiple Air Jordan 1 Low sneakers alongside Travis Scott, although those pairs are presumably delayed after the Astroworld tragedy. Instead, sneakerheads can look forward to Fujiwara’s shift away from Nike’s lifestyle models with his rework of a classic running shoe.

Keepin’ it simple — Fitting with past Fragment designs, the altered Zoom Vaporfly NEXT% looks less structural than its original counterpart, featuring a Swoosh closer to its collar and a beefed-up, cream-colored sole unit. Towards the heel, “FRGMT” branding appears alongside a Nike ZoomX logo.

Adding his signature minimal touch, Fujiwara has added a white stripe across the shoe’s black knit upper, with the graphic reading: “Engineered to the exact specifications of world-class runners. Nike Running.” The designer has also seemingly removed laces from the running sneaker, opting for stretchy bands that allow wearers to slip the shoe on and off.

Run, don’t walk — Fujiwara captioned his Instagram tease, “Nike by you,” insinuating that the Fragment Zoom VaporFly NEXT% is customizable. Yet due to overwhelming demand — and past release problems — Nike is unlikely to release the sneaker through its By You program, meaning the shoe may just be released in multiple color palettes or altered designs. Like past Fragment collaborations, the Zoom VaporFly NEXT% will probably drop on SNKRS via a lottery-based draw.

Neither Fujiwara nor Nike has announced when the sneakers would release, but expect a good amount of competition for the running model. Although it may not be as hyped as Nike’s Air Jordan 1 or Dunk, people are more than willing to splash out on an athletic sneaker so long as there’s a bigger name behind it — Beyonce’s numerous Adidas Ultraboosts and Off-White’s track-inspired Air Zoom Tempo NEXT% have all sold out immediately. Don’t underestimate Fragment’s Zoom VaporFly NEXT%.