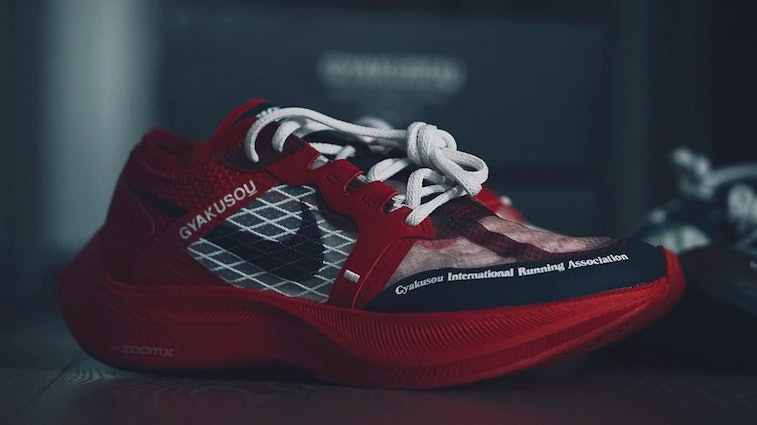 Undercover’s Gyakusou line for Nike consistently churns out scorching and often overlooked running gear. And even with that high standard, legendary designer Jun Takahashi has outdone himself with his forthcoming kicks.

The Japanese brand has teased a Gyakusou makeover for the ZoomX Vaporfly Next% 2, the latest version of Nike’s record-breaking marathon shoe. A reworked upper sees Nike’s flagship sneaker get more dynamic lines and a more arresting blood-red color scheme. New paneling makes use of transparent materials on the toe and a diamond grid for the quarter panel.

Gyakusou’s name also runs across the top of the swoosh, while the full “Gyokusou International Running Association” lines the toe cap. Nike easily could have rested on the laurels of the ZoomX Vaporfly Next% 2’s performance, but by bringing in Undercover it’s created a pair of kicks that’s just as competitive from a style perspective.

More on those laurels — Since first introducing ZoomX cushioning in 2016, Nike has been the dominant shoe brand on the marathon circuit. Eliud Kipchoge was wearing the ZoomX Alphafly X Next% when he became the first person to run a marathon in under two hours in 2019, and although that time didn’t officially count, he also set the current world record in the Zoom Vaporfly 4&. In last year’s London Marathon, the only event to be held during the pandemic, four of the top six runners were wearing the supposedly inferior Vaporfly version. At one point, international organizers considered banning the sneaker out of fear that it was too fast.

Earlier this year, Nike introduced its successor. The innovative sole that combines ZoomX cushioning with a full-length carbon fiber plate was left alone as Nike focused on improving the upper. A new mesh material replacing the Vaporweave previously used is softer and more breathable, while also providing more support alongside the improved comfort. Padding at the tongue reduces pressure from the laces, while the forefoot has been reinforced for better containment and durability.

For now, all we know about Undercover’s Gyakosou version of the ZoomX Vaporfly Next% is that it’s “coming soon.” We’ll have to wait for a firm release date, as well as more details on how exactly the upper was made over once again.