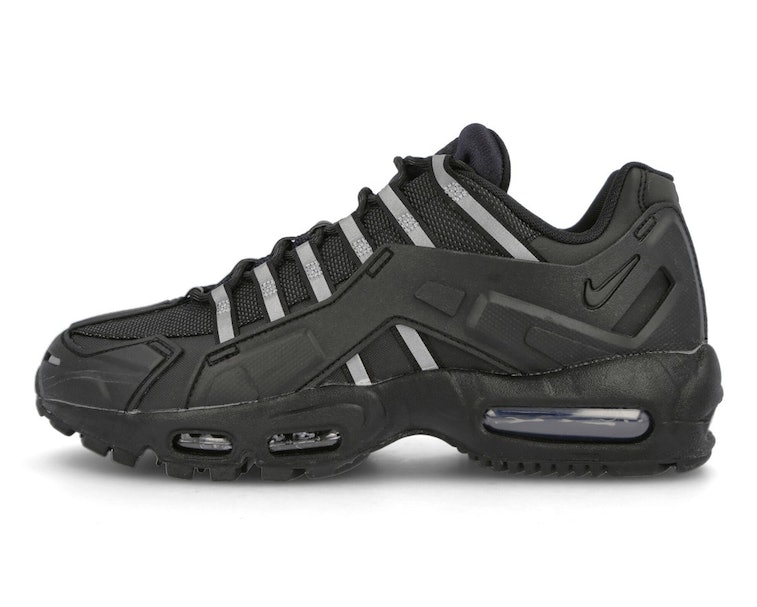 I hate to admit how cool military equipment looks. I by no means endorse the United States' war hawking ways, the gross sum spent on the defense industry, and the gear handed down to police to make them view the citizenry as the enemy. And yet my brain has been warped through movies and video games to look at the tools of the tyrannical trade and marvel. Just imagine if the same guap and effort were put into machinery that made our lives better instead of terrorizing people abroad and at home.

I can't promise Nike's retooled Air Max 95 NDSTRKT will make your life better, but it applies the tactical aesthetic to the classic sneaker to great effect. It looks like an urban assault vehicle, and absolute unit — and I urge you mad lads to scoop up a pair to wear with murdered-out cargos and other jawnz rightfully stolen from agents of violence.

95 to 100 — Traces of Nike's first shoe with a visible Air unit are still visible underneath all of the reinforcements, which include robust rubber panels, a sturdy toe cap, and a more treaded outsole. The shape of the heel remains the same, and the ribboned eyelets meant to invoke a rib cage are now made out of what looks to be 3M.

This blacked-out sneaker is actually the second Air Max 95 NDSTRKT, the first of which came in a "Neon" color scheme pulled from the first AM95 ever released. It does more than just look the park, with the upper constructed from a water-resistant synthetic textile that should make it useful in the winter.

Nike stays tweaking its seminal Air Maxes, and the NDSTRKT is one of the best remixes in recent memory. The Air Max 2090 and Zoom 950 have ended up kinda goofy in their bid for stepping into the future, but the 95 NDSTRKT succeeds in putting utility before anything else.

Stay tuned for a release — The "Neon" NDSTRKT, which first released late last year in Japan, is finally slated to come to the U.S. with a February 15 drop on the SNKRS app. Likewise, the black version is due to release overseas at retailers including Overkill.

If you're an Air Max devotee, you may as well go ahead and pick up the Neons next month for an even $200. But if you want something that looks tougher, keep your eyes peeled for a stateside release of the tactical black.