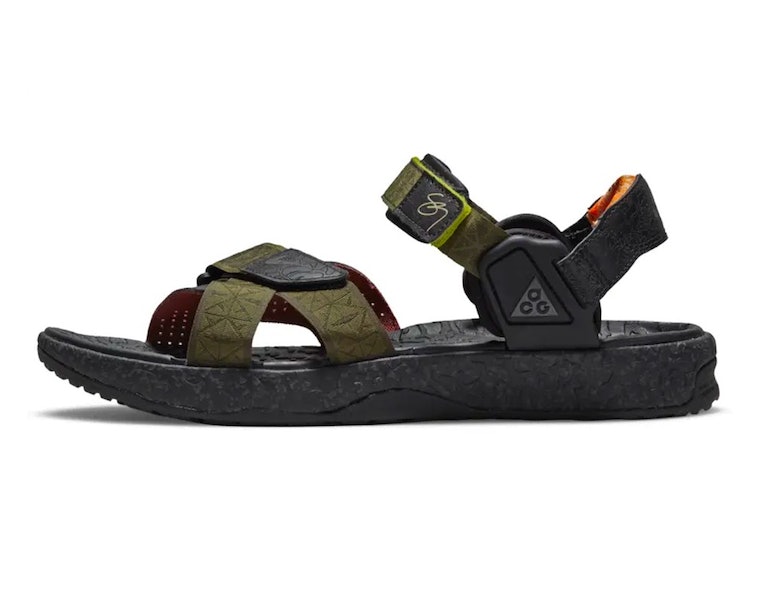 Nike ACG’s Air Deschutz is one of the best outdoor sandals in the game. Air cushioning sits below a well-secured strap system, with a healthy amount of tread equipping it for modest trails. Each time a new version comes out, it’s all but guaranteed to sell out — and the newest offering should be no different.

All Conditions Gear is partnering with Sig Zane Designs, a Hawaiian brand popular on the islands for honoring both its environment and native people. The collaborator is a natural choice for this season, as Nike ACG has centered its new spring / summer collection around the Hawaiian landscape.

Instead of opting for the obvious, Sig Zane has decorated the Air Deschutz’s with a pattern invoking the ‘Ohi’a tree and its Lehua flower. In addition to representing one of Hawaii’s native flora, the pattern also tells a story from Native Hawaiian mythology.

Sig Zane’s creative director breaks it down — The story Metrosideros polymorpha tells the tale of two young lovers named ‘Ohi’a and Lehua. Pele, the goddess of volcanoes, shot her shot at ‘Ohi’a but was rejected and turned him into a tree in a jealous rage. To reunite the lovers, other Hawaiian gods turned Lehua into the flower that blooms from the ‘Ohi’a tree.

The bright orange on the heel strap’s underside represents the buds of the Lehua flower, while the colors and pattern on the outside of the straps represent the Lehua in its final form. Sig Zane creative director Zuha’o Zane said on the brand’s Instagram stories that he sees the different stages of the flowers representing the islands’ different temperature zones. The Air Deschutz is able to handle these zones, from the beach to the mountains, because of its versatility.

“I wanted to capture some of the intimacy that we know our islands by,” Zane said. “We’re able to share this ancestral knowledge that has been embedded within our culture for generations.”

Hang tight for a release — Release details for the new Air Deschutz have yet to be announced, but with Sig Zane beginning to show its collab through its social channels we should expect it to launch in the coming weeks. The killer outdoor sandal typically retails for $90, and if you scoop up a pair you’ll have the only one you need for the entire summer.