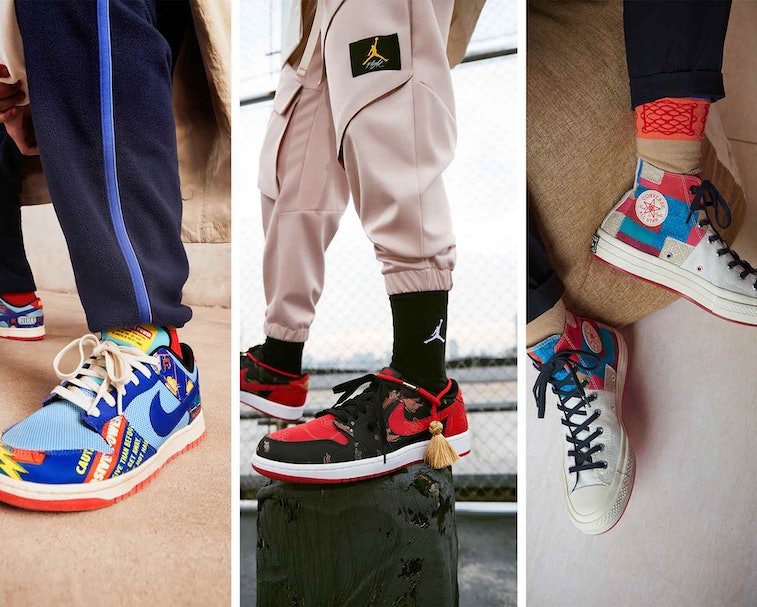 A whopping total of 16 sneakers will be released, the most prominent of which should be the Dunk OG, Air Jordan 1 Low, and wear-away Air Jordan 5 Low. The festivities will begin tomorrow, January 1, with releases to follow until the very end of the month.

Fireworks — The Dunk OG headlines the range and takes its inspiration from fireworks, with an upper that nods to firework packaging. Wrinkle paper textures add to the effect, while a warning label appears prominently on the tongue. It'll release January 22 through the SNKRS app as the Year of the Dunk extends into 2021.

Alongside the Dunk OG is a women's Dunk Disrupt with a pink, red, and blue suede upper. Illustrated characters appear embroidered near the heel and on the tongue patch, while the outsole arrives in an always welcomed gum.

The Air Jordan 5 Low, which features a canvas upper that wears away to reveal a pattern pulled from firework packaging, is slated to drop on January 14. Following later will be an Air Jordan 35 with a wear-away treatment, the first time we've seen it on one of the more modern Jordans.

Rounding out the range is a Converse Chuck 70 that may be the sleeper of the lot. Its paper-like upper is the most authentic to the theme of packaging, and a printed heel strip features several different graphics that looks like a comic strip.

Knots — A variety of knots appear throughout another range of sneakers, including an Air Jordan 1 Low that adds a jacquard pattern and foil accents to the iconic Bred color scheme. A removable embroidered bracelet comes attached, and symbolizes a red knot bracelet worn for good luck. It'll cap off January by releasing on the 31st.

Woven patterns define the collection's Kyrie 7, SuperRep 2, and Air Max 2090. But best of all is the Blazer Mid 77 with a roughly embroidered Swoosh. All four of these kicks have a custom tongue tag that references tickets to temple fairs. Once again, a Chuck 70 is included, this time with an ornate embossed upper that pays homage to Chinese knots.

These will be the least hyped of the Chinese New Year collection, but the pink Escape Run with a flower medallion on the laces and the patchwork Chuck 70 are worth paying attention to. Demand will be high for some of the higher-profile silhouettes that celebrate a holiday from the world's most populous country, but you may be able to scoop up some of the more under-the-radar kicks more easily.