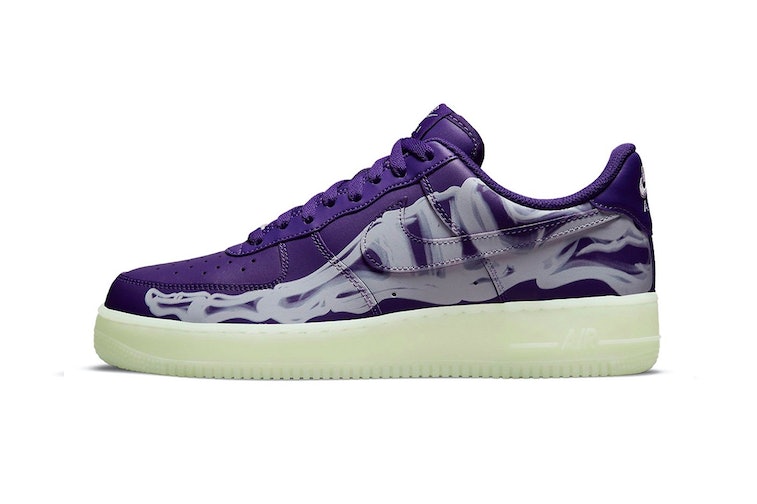 Nike is continuing its Halloween tradition of giving the Air Force 1 an X-ray treatment. The Air Force 1 Low “Skeleton” is back for the fourth year in a row, this time appearing in a brand-new “Purple Punch” color scheme.

An all-purple upper is hit with an anatomically correct, air-brushed X-ray skeleton graphic on both the lateral and medial sides. The sneakers’ insoles also provide a top-down look at the foot structure to complete the mildly spooky annual tradition. And when the lights go off, both the sole and lace dubrae glow in the dark.

Nike has previously released its AF1 “Skeleton” in black, white, and orange — which makes this year’s purple version the most overt deviation from your typical Halloween color palette. Resale prices have also dipped with every iteration after the first “Skeleton” sneaker dropped in white, signaling that the latest makeup shouldn’t be too difficult to make yours.

Nike always kills Halloween — While you’d be hard-pressed to find a holiday Nike isn’t willing to commodify, Halloween is among the best times of the year for the Swoosh’s themed releases. Last year saw the release of an unofficial Air Max 95 “Freddy Krueger,” a nod to the legendary Dunk Low that had to be pulled from release in 2007 because of copyright infringement.

During that same year, Nike was able to move forward with a Dawn of the Dead Trainer 1 and “Jason Voorhees” Dunk High without any legal issues. A year prior, the “Frankenstein” Air Force 1 Low was first released and continues to be one of the best of Nike’s spooky series yet. The timing of Día de Muertos, which Nike is also keen to celebrate, on November 1 and 2 typically brings another series of skeleton-themed releases around the same time of year.

For now, Nike’s latest Air Force 1 “Skeleton” is in the early leak phase and thus a release date has yet to be confirmed. It should drop in the week preceeding October 21, however, and could very well be joined by more Halloween sneakers.