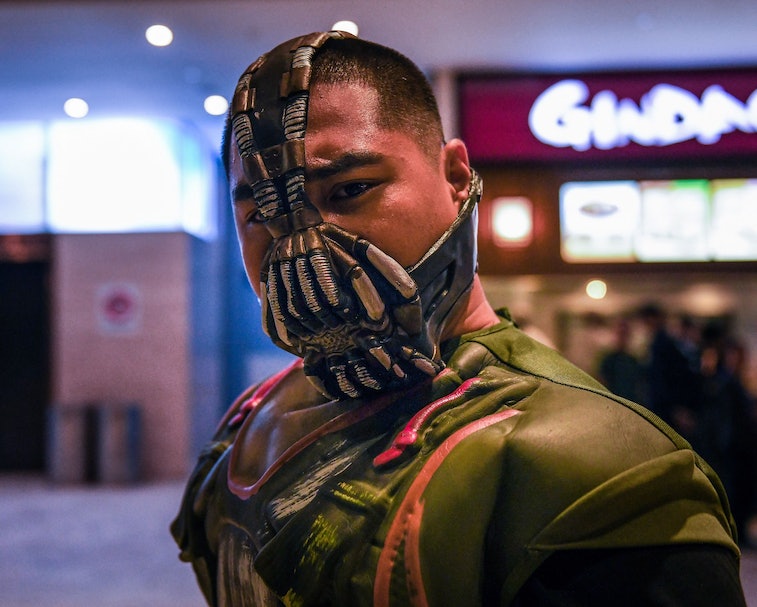 One of the dumbest suggestions in response to face masks and COVID-19, especially if it's true, is the idea that many men won't wear masks because it isn't "tough." Naturally, the best response comes in the template of a meme: "Fellas, is it gay to die?"

This implication doesn't even hold up well. Turn to Hollywood, which has been an oft-cited source for standards of masculinity, and you can find plenty of on-screen badasses who rocked masks. Take Bane as a recent and prominent example. The dude broke Batman's back, for god's sake. If you're so worried about looking tough at a time like this, just wear his.

In fact, plenty of people are already.

Good luck finding one — As reported by THR, Bane's signature mask has sold out from numerous costume stores and has inspired several cloth makeups from Etsy sellers. While you can still find a Bane mask on Amazon, the true villain of commerce, they've sold out on sites including Costume.com, BuyCostumes.com, and HalloweenCostumes.com.

It's impossible to tell if this development is because of people who want to look tough, or merely because DC fanboys are embracing the emergence of masks as not only socially acceptable, but recommended by the CDC. Whatever the case, it's a hilarious phenomenon. And it's extended to costume masks on the whole.

"Looking at sales figures, the adult mask had quite a sales spike in April and early May, which is unusual for this time of year," David DeJac, a spokesperson for Costume.com, told THR. "The extra activity seems to be across the board of mask categories, rather than overwhelming consistency in any one area, probably since any searches using the word 'mask' are showing up much more frequently than normal."

How about Darth Vader instead? — Don't want to line Jeff Bezos' pockets or settle for a cloth version? Or maybe Batman just isn't your thing? Well, if you've got a 3D printer consider these schematics for a Darth Vader mask. Download the files, print it, and start doing your best James Earl Jones impression as you wear it out in public. Just remember that none of these plastic masks are going to be medical grade.

And no one will care who you are until you put the mask on.