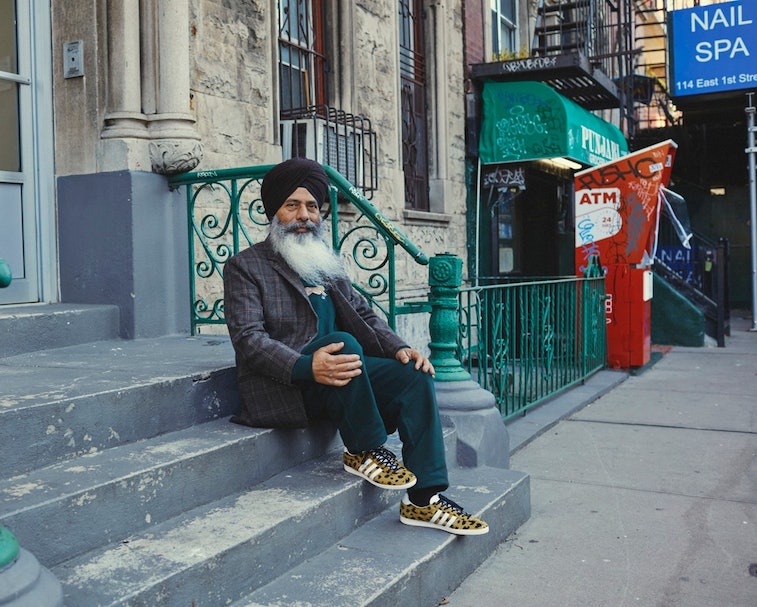 After linking up with Adidas in August in its first collaboration with one of the sneaker giants, Noah is gearing up to release its second. This time, the cult menswear brand continues its championing of older models with the Gazelle, a low-profile sneaker that's more than 50 years old.

The classic sneaker has maintained relevancy ever since debuting in 1966, and Noah looks specifically to how it was worn in the '80s and '90s. Adidas made the Gazelle with a slightly slimmer profile during that era, and it was adopted by skateboarders because of its flat sole. For pro skater Richard Angelides, it was the only shoe he wore.

Noah's spin on the Gazelle is instantly recognizable as its own, even more so than its first collab, rendering the shoe in two patterns that make the usually understated sneaker standout. Cheetah print, which has become a go-to for the brand since last year, and an orange duck camo that debuted this season situate the sneakers on the line between classic menswear and skate apparel — an encapsulation of what Noah is all about.

One's got some shag — The cheetah print variant comes in a faux pony hair that gives the upper an alluring sense of texture, while the camo is done up in canvas. On both pairs, Noah's name is embossed in gold on one of the stripes (instead of just above it), and its core logo that routinely sells out on T-shirts and hoodies appears on the mustache. All the detailing is done with a simple white leather, which helps to ground the sneakers with such fetching prints.

The beauty of these pups is how versatile they'll be. The Gazelle is already something of a do-everything sneaker, but the cheetah print, in particular, will make it easy to dress up. I'm also enticed at the prospect of someone skating in it, just to see what the faux pony hair would look like all scuffed up by grip tape.

Noah's first Adidas collab flew under the radar — The Adidas SL20 and SL72s released by Noah earlier this year were available to purchase for quite some time. Some may see this as an indictment in a sneaker landscape that values hype over everything, but there's something to be said for a solid sneaker that doesn't require setting an alarm to acquire.

You'll be able to scoop up the Noah x Adidas Gazelles on December 3 through Noah and Adidas' websites, as well as the Confirmed app. Both will sell for $160, which seems more justified on the faux pony hair than the canvas, and it seems likely that you'll be able to take your time to decide if the cop is for you.