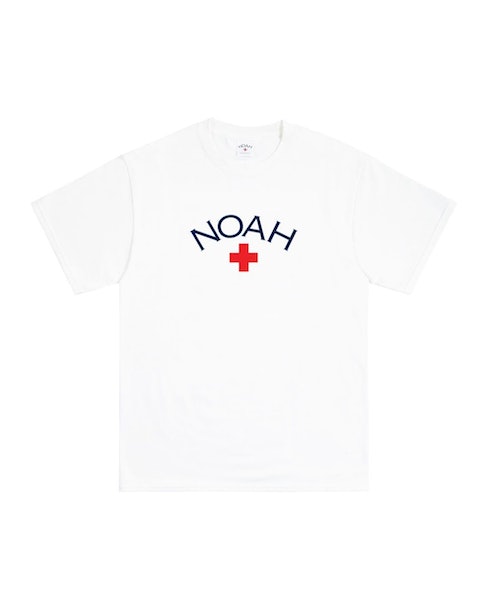 Much like Supreme, Noah has a history of using its T-shirts as a platform for fundraising. The brand founded by former Supreme creative director Brendon Babenzein has made charitable efforts a core value, particularly when it comes to social and environmental issues. This time around, in the midst of the coronavirus epidemic, Noah is dropping a limited-edition tee to raise money for the organization Direct Relief.

The simple white T-shirt features a subtle change to the core logo, as the Knight's of Templar cross is replaced by the red emblem used throughout the medical industry. On the rear, a "Thank You" with a heart goes out to all the workers on the frontlines risking their own health to fight COVID-19. All proceeds from the tee's sales will go to Direct Relief, which is providing personal protection equipment to medical personnel, and giving aid to ICU departments and organizations addressing the crisis.

Noah's past efforts — In the last year alone, the New York City-based brand has designed T-shirts to support abortion rights, youth inequality, poverty in NYC, the Bahamas after Hurricane Dorian, and preservation of The Great South Bay between Long Island and Fire Island.

Other recent highlights include a "God Protect Robert Mueller" tee with proceeds for Generation Citizen; and one that read "Free the Children" with an aggressive "Fuck Stephen Miller" text on the sleeve atop a crossed-out Swastika.

The Thank You Core Logo tee marks the first time Noah has changed its insignia as part of a fundraiser. Always selling out when it appears prominently on a T-shirt or hoodie, it's been altered to raise awareness for overfishing and express general disillusion with the state of the world. But usually, its alterations are more about a change in aesthetics, whether it's a skull and crossbones or an arrangement of citruses. Utilizing the core for philanthropy ensures it'll be a hit.

A limited edition — The only downside here is that the T-shirt will be released in limited quantities instead of being available for pre-order to maximize proceeds as some previous efforts have done. It's a complaint that was also made last week in regards to Supreme's COVID-19 box logo, which was all but impossible to secure. A spokesperson for Noah told Input the limited release is to reduce pressure on its warehouse with reduced staff because of the pandemic.

Fortunately, as dedicated as Noah's following is, this release won't be nearly as crazy either. If you're diligent at 11 a.m. EST Thursday, you'll probably get your hands on the shirt. Wait any longer and your luck will likely run out.