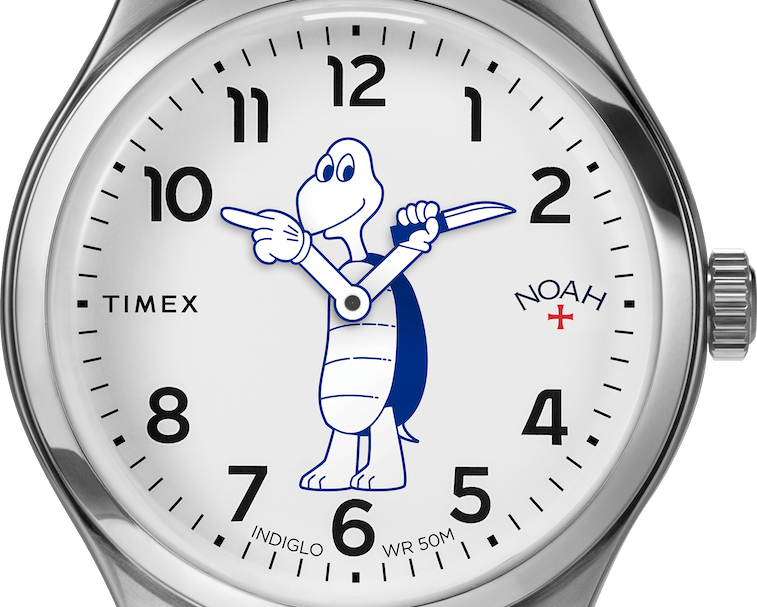 Noah has teamed up with Timex to release its very first watch, and it's using the occasion to bring attention to waste produced by the fishing industry. The knife-wielding, middle finger-holding turtle from the brand's "Ghost Nets Suck!" T-shirts makes a return on the Timex Waterbury, which uses the mascot's extremities as the watch hands. It's an amusing little feature, but because it's Noah we're talking about, there's more to the watch than a cheeky design.

10 percent of proceeds from the timepiece will go to the Ocean Defenders Alliance, a One Percent for the Planet partner that physically goes out to remove ghost nets and other industrial fishing waste from the ocean. Ghost nets is the term for fishing nets that have been lost or deliberately left in water. They're difficult to see in low light and can end up entangling ocean creatures for no good reason.

Sustainability comes into play through the band, which is made of 100-percent recycled polyester from We Are Spin Dye. The manufacturer's dying practices use 75 percent less water and 90 percent fewer chemicals than industry standards while reducing energy consumption by 25 percent and its CO2 imprint by 30 percent.

Some watch specs — Priced at just $128, the Noah Timex Waterbury is a damn good return for its money. The 38mm timepiece comes with Timex's Indigo backlight and is resistant to water up to 50 meters deep. It goes to show that you don't need to throw racks in order to put a quality diving watch on your wrist.

Supreme also released a watch more recently, and it couldn't be more different. The $14,000 diamond-encrusted timepiece made with Jacob & Co. came with an alligator strap and was outrageously gaudy. A "cheaper" watch was also made available for $12,000, but I would not in good conscience recommend wearing either. Noah's watch is nearly 100 times cheaper and is cooler by multitudes.

The first watch from Noah will release Thursday as part of its weekly drop. It's an unusual entrant in the realm of watch collecting, but a worthy one nonetheless. With a low, low price of $128, we can all participate.