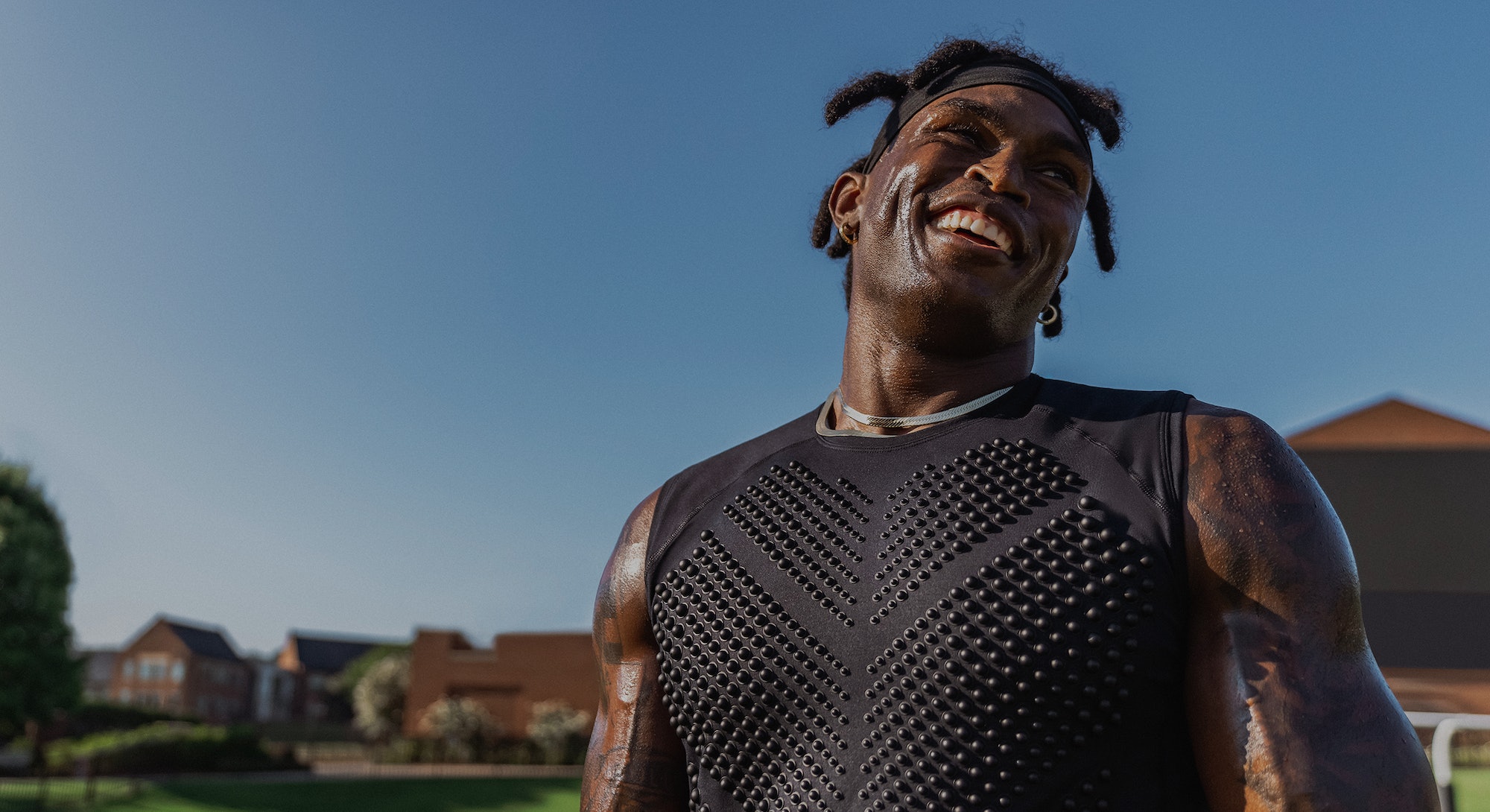 The next big development in training apparel may just look a lot like a superhero suit.

This week has brought the launch of Omorpho, a brand-new sportswear brand that’s making apparel heavier instead of lighter. Small amounts of weight applied strategically across a vest, tops, and bottoms add up to sums heavy enough to increase your fitness, speed, and power. In other words, the apparel is ribbed for your advantage — and wearing it also has the effect of making you look like you’re going to save (or destroy) the world.

“Sports apparel today is optimized for competition, but most people compete less than 1 percent of the time,” Stefan Olander, co-founder of Omorpho, said in a release. “We’ve created a beautiful and functional collection for the other 99 percent using a completely new approach to deliver better results by adding small amounts of weight that don’t restrict movement.”

Omorpho’s debut line of weighted performance apparel has been dubbed Gravity, and the key to its efficacy is a series of bulbous polyurethane beads called “Gravity Spheres.” On the G-Top long sleeve shirt, for example, Gravity Spheres are applied across the front, back, and sleeves for a total weight of approximately 2 pounds and 6 ounces. The weighted beads start off smaller at the top of the chest and gradually get bigger as they go down, while breaks in the application around the shoulders and elbows are made to avoid constricting any movement.

Spearheading the design is Natalie Candrian, a former Nike designer who’s also responsible for Olympic sprinter Allyson Felix’s independent footwear line. Originally, Omorpho’s intent was to create the perfect weighted vest, but the brand then began exploring how to apply weight across and an entire range of training apparel.

The launch of Omorpho comes after three years of research, testing, and development. An initial vest prototype used tape pto affix the weights, but Candrian and her team would eventually stumble on the idea of Gravity Spheres as a solution to weigh down the apparel without making it overly cumbersome. Because the weight is spread out over the garment instead of being concentrated in one area, such as your chest or your ankles, you may even forget that it’s there, while still enjoying the benefits of training made intentionally more difficult. And as an added development, the Gravity Spheres are also cool to the touch.

Citing external studies, Omorpho says adding weight resistance to your training can increase your vertical jump by 9 percent, power by 8 percent, and speed by three percent. It’s also conducted research with its Gravity apparel and found that it can lead to an increase in caloric burn by 8 percent while increasing the work required by 6 percent.

At the base of Omorpho’s Gravity line is a breathable, moisture-wicking fabric that should feel familiar to anyone who’s worn contemporary performance apparel. The Gravity Spheres are applied to the exterior so you won’t feel them directly — but onlookers are sure to notice you’re wearing what looks like a super suit.

Annie Kunz is an Olympic heptathlon athlete from the United States and is one of Omorpho’s ambassadors along with NFL wide receiver Julio Jones, BMX rider Matthias Dandois, and pro tennis player Ajla Tomljanović. Kunz began training in the Gravity apparel this fall and said she’s received plenty of attention whenever she’s worn it. But more crucially, it’s been a boost for her workouts, and one she intends to take advantage of going forward.

“It was important to us to create something that works perfectly and looks stunning.”

“When you’re going to the Olympics, everyone is so good. You’re looking for any area in your training where you can get an extra edge,” Kunz told Input in an interview. “I really wish I would have had it last spring training for the Olympic trials because it really does come down to milliseconds in track and field.”

In an environment as crowded as sportswear, the distinct appearance of Omorpho’s Gravity line driven by utility may also have more impact than a logo could. It looks like anything else on the market, and the Gravity Spheres could become as intrinsically linked to the brand identity as, say, Hoka One One’s absolutely massive midsoles on its sneakers.

“We can really stamp this look as ours,” Candrian says, “From the beginning, it was important to us to create something that works perfectly and looks stunning. For me specifically, I could start completely free. There was no brand identity that I had to funnel the design into — we were creating it right then and there, and that’s pretty unique and exciting to be trusted with that.”

Prices for Omorpho's Gravity apparel begin at $150 for the women’s biking shorts and top out at $400 for the G-Vest. It’s not cheap, but it’s designed for serious training. The brand also applied vigorous testing to ensure the Gravity Spheres won’t wear off or become misshapen when exposed to high levels of height, and despite an appearance that may suggest otherwise, the garments can be washed under normal conditions and tumble dried on low.

Every sportswear and sneaker brand today will tell you that it’s gear will make you a better athlete, but by making its apparel heavier Omorpho may deliver on that promise better than anyone else. The moment you’ll know if it’s true will be when you begin to exercise without the Gravity apparel on any longer.