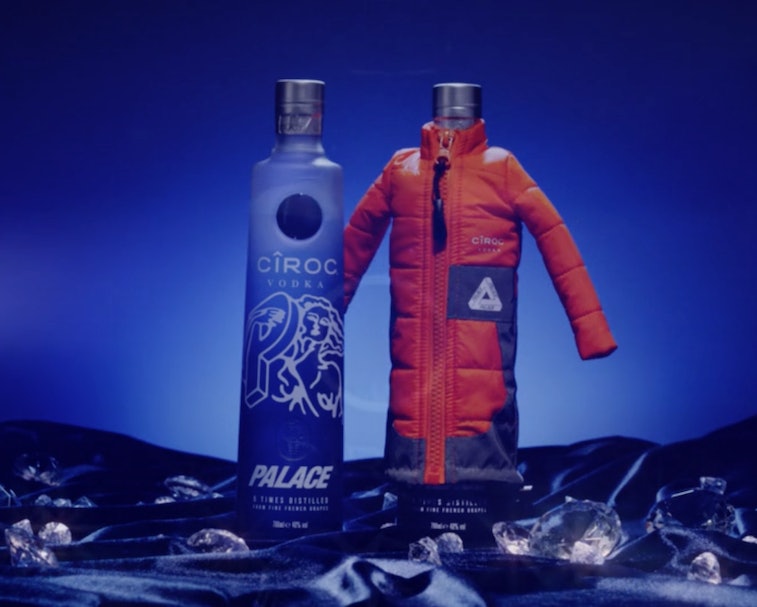 The must-have puffer coat of 2020 isn't for you to wear, but for your favorite Russian spirit.

Palace is releasing its second special-edition bottle of Cîroc vodka, and the British streetwear brand has outdone itself by creating a tiny puffer coat that acts as a koozie. Down fill, reflective 3M detailing, and a zipper, combine for a look that's purportedly "inspired by rap music" and make the miniature a legit Pal-Tex Puffa and the coolest way to keep your vodka... cool.

The campaign is perfect — With how great Palace's irreverent (and largely irrelevant) product descriptions are, it should come as no surprise that it's knocked the promo video out of the park. The clip posted to the two partners' Instagram accounts teases close-up shots of the orange puffer with a sultry voice that touts it as a signal that "There's a party over here." Eventually, Cîroc branding shows itself and the camera zooms out to reveal the coat is worn by a vodka bottle.

The bottle itself comes with dual-branding and graphic of the Palace Angel holding up the Palace "P." Presumably, the bottle and puffer will come together as a package deal — but for now, Palace has only said they'll both release through Cîroc's website.

Palace and Cîroc first linked in 2017, when a bottle of vodka with a repeating Palace logo was released. Whether drank or not, many of them probably still sit on the shelves of 20-something hypebeasts around the world.

Not for kids — My favorite result of this collaboration is that Hypebeast felt the need to post a disclaimer discouraging underage drinking while covering it. The message is a tacit acknowledgment that streetwear is a kid's game that many adults still participate in, which all of us of drinking age should admit is silly.

Releasing the vodka and its insulating accessory exclusively through Cîroc's website is, in all likelihood, to ensure kids can't buy it. Come armed with your ID on December 2 and you can make the coat yours, assuming stocks last long enough for you to make it through checkout. Shortly after, you can expect to see the puffer on its own being hawked through various resale platforms where underaged kids will certainly scoop it up.

Will they put it on their own illicitly acquired bottle of alcohol or something more benign like, uh, a bowling pin? Who's to say, but Palace and Cîroc can shirk responsibility.