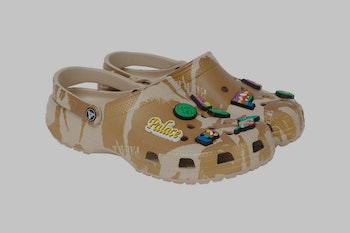 Crocs have never been hotter than they have during the pandemic, but don’t expect them to go anywhere as we near a summer the hews closer to normal.

Palace will become the latest streetwear collaborator to embrace the kitschy foam clogs, as teased in the British streetwear brand’s summer preview. Under its stead, the classic Crocs are rendered in a brown-on-brown camo — but it’s the Jibbitz where the shoes really stand out. A colorful assortment of charms come with Palace’s clogs, including the brand’s name, a delightful little turtle, and few variants on the peace sign.

On the strap, Palace’s Tri-Ferg logo replaces that of Crocs while the former’s name is also tucked into the camo pattern — two satisfying developments if you’re obsessed with branding.

As always, the product description rocks — Palace’s product descriptions often notoriously veer into the incongruous, but for its Crocs collab, the brand has delivered the most succinct reason why you should embrace the once-mocked footwear. “Don’t knock it till you tried it,” Palace says. “ Comfort levels 100 and you instantly become a better chef.”

Anyone who’s adopted the Croc during the past year — or, you know, before it was cool — can indeed confirm comfort levels are at 100. The shoe’s position on the matrix of comfort and ease-of-slipping-on is a huge part of why sales have exploded during the pandemic, when so much time at home has made coziness the preeminent reason to get dressed. Crocs’ revenue has risen a whopping 64 percent since this same period last year, with CEO Andrew Rees saying demand is “stronger than ever.”

But it isn’t just happenstance that’s led to Crocs coming back stronger than ever. The brand has made a concerted effort to get into the streetwear space and poached a Nike executive to continue riding the success... helped, in part, by collaborations with the likes of Justin Bieber, Bad Bunny, and Chinatown Market.

The question going forward is if people will continue wearing Crocs as vaccinations enable more socializing. And if the clogs continue to look like the ones Palace has cooked up, the answer is why not?

Stay tuned for a release — Palace always dumps its entire seasonal product lineup, with the exception of a few surprises, ahead of the beginning of its weekly releases — meaning we could see the Crocs release as soon as this week or long into summer. But whenever the clogs do release, you should expect them to come in at around the palatable price of $60 that other Crocs collabs have.

When hype is this cheap, no wonder Crocs have taken off so easily.