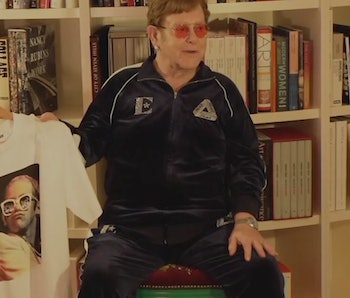 Two British icons of very different ages and demographics are joining forces for an unexpected but spectacular collaboration.

Palace and Elton John are releasing a collaborative capsule that pulls heavily from the singer’s famous costume for his concert at Dodger Stadium. Two different images of John in the glitzy Dodgers uniform appear on T-shirts, crewneck sweatshirts, and a skateboard deck — but where things get really fun are with a pair of tracksuits that make the connection less explicit.

Available in either navy blue or white, the velour tracksuits deliver the same mix of sportiness and glam without looking like a Halloween costume. On both the jacket and pants, Palace’s Tri-Ferg and John’s star “E” logo appear on alternate sides, the latter mark in bedazzled fashion. You’ll then find another Tri-ferg on the rear of the jacket in bigger, glittery form — and to borrow a term from the man himself, it’s absolutely “gangbusters.”

“The bitch is back” — That’s the tagline for the collaboration, and you can hear John say it himself in the campaign video that’s as delightful as we’ve come to expect from Palace. There’s nothing heady or goofy in this spot, though, just Elton John rocking the tracksuit while offering his assessment on the garms and some nostalgic musings on the 1975 concert.

While the video is fun for everyone regardless of your plans to purchase, other goods up for grabs include a jacquard knit sweater featuring John’s face and another vintage performance shot that’s been altered to spell out Palace’s name on his sunglasses. If you’re in the copping camp, you’ll be able to do so at 11 a.m. ET this Friday, March 10, through Palace’s website and physical stores.

In an ideal world, certified boomers suddenly become interested in a Palace drop — just as some zoomers might take the opportunity to discover what a genius Elton John is.