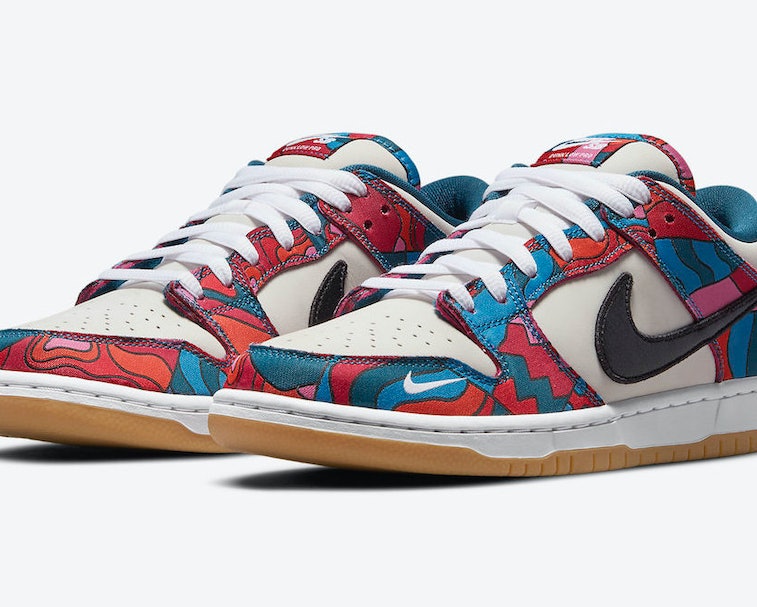 The first of Nike SB’s bangin’ lineup of Dunks for the Tokyo Summer Olympics have finally been given a release date. Kicking things off will be FTC’s Japanese bath house-inspired SB Dunk Low releasing Tuesday, followed at the end of the month by Parra’s vibrant take on the silhouette that matches Nike’s official Olympic skateboarding uniforms.

In addition to matching with the unis for Teams USA, Japan, Brazil, and France, Parra’s new Dunk can also be seen as a more vibrant version of its release from 2019. That predominantly white Dunk Low also featured turquoise, magenta, and pink accents — including an insole with a parallel pattern — but the flair is now brought to the forefront for the latest collaboration.

Artist and founder Piet Parra was tapped by Nike to design uniforms for skateboarding’s first inclusion in the Olympic Games. His signature color scheme fills in the outlines of distinctive landscapes from the respective national teams and is rendered through the lens of Japanese art. The shirts are a lot more fun than your typical Olympic fare, as well as less overtly nationalistic, and now the Parra aesthetic is canon for the Summer Games.

Light the torches — Nike SB’s first appearance at the Olympics doesn’t spell change for the skateboarding line. Its quartet of Olympic collaborations continues the creative approach that helped pave the way for the modern sneaker landscape, opting for more subtle ties to the sporting event than national team colors.

FTC’s Dunk Low looks to public bathhouses in the host country with a textured upper taking its cues from white tiles. The idea is to make a squeaky clean sneaker fit for the purity of its source material, which can be seen in the suede paneling and semi-translucent outsole, both in blue.

Both the FTC and Parra Dunks will release through Nike’s SNKRS app for the low price of $110 — if you can get them. The tiled Dunks come first at 10 a.m. ET Tuesday, July 21, while Parra’s will come 10 days later at the same time on July 31. In the meantime, we’re also waiting to see when the other Olympic collaborations with Quartersnacks and Gundam will release, the latter of which may just be one of the most coveted (and nerdy) kicks of the year.