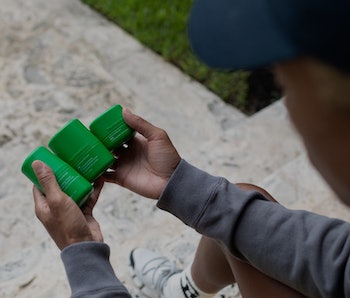 Pharrell’s skincare routine has been a source of intrigue for years, as anyone with eyes and appreciation for smooth skin can’t help but marvel at the man’s agelessness.

While being a vampire hasn’t been ruled out, Pharrell has been magnanimous in imparting his grooming wisdom. Back in 2017, he told Dazed it was as simple as “exfoliating like a mad man” and drinking a lot of water. Previously, he also said Naomi Campbell steered him toward a dermatologist, who in turn gave him Glytone Self-Foaming Cleanser, as well as a Clearing Toner and Moisturizer.

Now, Pharrell is ready to profit off of the public’s obsession with his flawless skin. Under the Humanrace banner, the multi-hyphenate is launching his own skincare line. It feels like an obvious development and, in retrospect, the act of merely showing his beautiful face in public has served as the most effective marketing he could ask for. For men especially, we can’t imagine a better person to hawk skincare.

Just three products may be all you need — Keeping in line with what we already knew about Pharrell’s regimen, the Humanrace skincare line consists of just three products: a cleanser, exfoliant, and moisturizer. Wading into skincare can very quickly escalate into an apothecary’s worth of products, but it’s these three that are most essential.

The Rice Powder Cleanser comes dry, and a fine sized portion of it mixed with water also provides gentle exfoliation. For deeper exfoliation, enter the Lotus Enzyme Exfoliant, which has an 8-percent concentration of glycolic acid. Completing the trio is a Humidifying Cream with a basis in Chinese medicine.

Pharrell’s first foray into skincare also makes strives toward sustainability, as 50 percent of the green packaging is made from recycled plastic.

Follow his lead later this month — All three products will go on sale November 25 through Humanrace's website. The stuff ain’t cheap, with prices starting at $32 for the cleanser and rising up to $46 and $48 for the exfoliator and moisturizer, respectively. To mitigate the financial damage, a bundle can be had for $100.

It may be hard to convince dudes to make such a financial investment in their skin, even if it amounts to a drop in the hat / shoe(?) compared to the average sneakerhead’s spending. All we’ll say is that if you’re going to imitate Pharrell in any way, chasing his immaculate skin will have a much better payoff than any of his sneakers or clothes. Jawnz are cool, but a glowing face will take you much further.