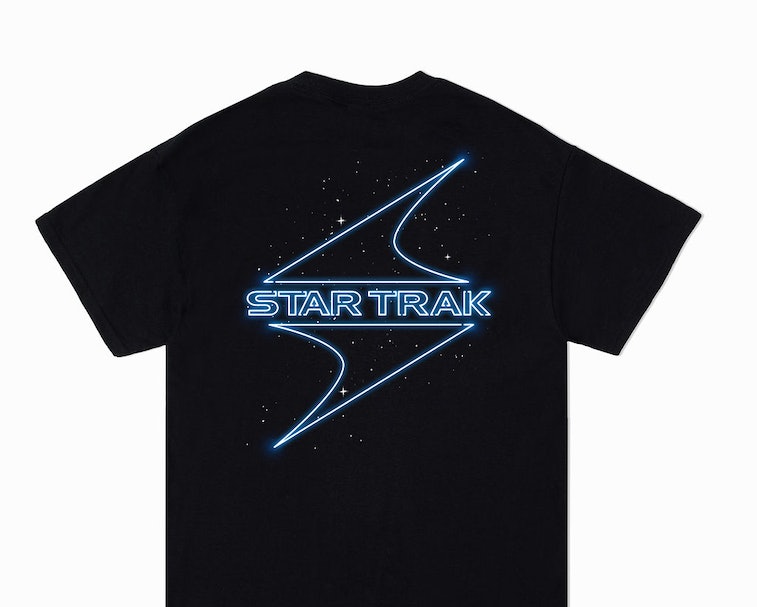 Star Trak Entertainment is back in full force, at least when it comes to merchandise. Pharrell’s once star-studded record label has been cashing in on early aughts nostalgia through collaborations with Hidden NY, Human Made, and Billionaire Boys Club. And even though the label is now defunct, Star Trak is launching its own in-house clothing line.

A new range of space-themed merchandise will be available for 48 hours only beginning Friday, July 30. The small collection is comprised of T-shirts, hoodies, and socks featuring the iconic Star Trak logo and other cosmic graphics. In-house releases directly from record labels are often a crapshoot, but the Star Trak goods remain hot without any collaborators involved.

A near re-issue of the classic black Star Trak tee is all longtime fans really need, but the range also features an attractive rocket launch graphic in addition to a cosmic cluster. While the return of ‘00s staples like JNCO or lowrise jeans remains questionable, indulging in sartorial nostalgia for Pharrell’s iconic label is a much less risky endeavor.

Star Trak used to be stacked — Before fading into dormancy, Pharrell’s record label at various points counted Clipse, Slim Thug, Snoop Dogg, and Robin Thicke among its roster, in addition to the producer’s various groups. The Star Trek hand symbol was adopted by the label as its own, and you couldn’t watch MTV for long without seeing it thrown up throughout the aughts.

Pharrell has gone heavily into branding, from his Adidas line to a skincare brand launched last year. Somehow, it doesn’t seem to induce the same eye rolls as Travis Scott’s ubiquitous physical goods — and we can’t bemoan Pharrell for looking back to Star Trak as another lucrative opportunity.

Star Trak’s merch will go on sale through a dedicated site beginning at 12 p.m. EST Friday, with prices ranging from $18 for the socks to $125 for the hoodies. Once the 48 hour window expires, the goods will no longer be available — but just as N.E.R.D. stands for, nothing ever really dies.