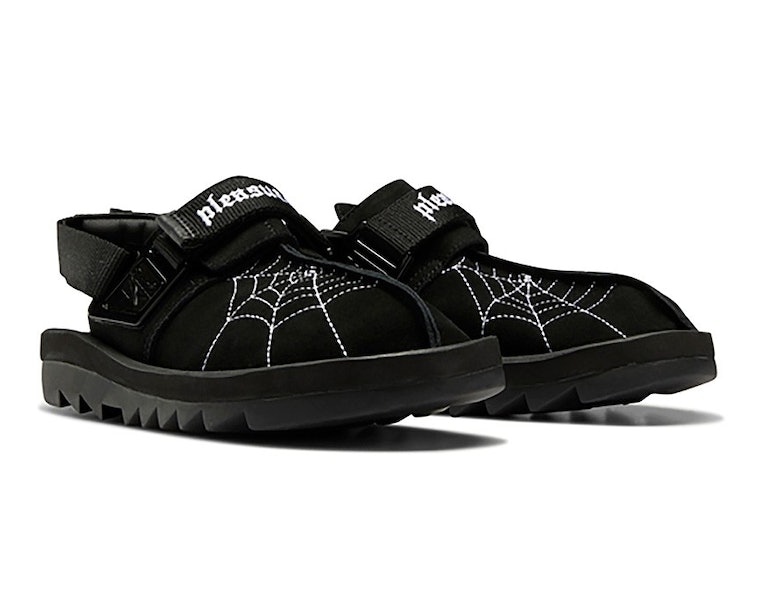 Reebok's Beatnik sandal has quietly made a return to the United States two years after it was revived to a more receptive audience in Japan.

More of a mule than a sandal, the quirky silhouette features a fully wrapped forefoot with a jagged outsole. It was originally released in 1993 and achieved a cult following in Japan before being discontinued. That made the country an ideal test market for the Beatnik's re-release in 2018. Now, after a quiet general release through Reebok's U.S. site, the sandal will get a higher profile thanks to a collaboration with Pleasures.

Pleasures' signature spiderweb — The most visible detail to come from Pleasures is the brand's signature spider web graphic, which is embroidered onto the toebox along with a spider on the heel strap. But the real elevation comes from the material, which has been upgraded to suede from the standard Cordura. This makes it more suitable for city life than any trek outdoors — but then again, how many gorpcore enthusiasts are actually wearing their gear for what it's intended for?

Sandals are poppin' — As we've covered here before, the men's sandals space is enjoying a boom as more dudes shed their fear of baring feet. And mules specifically have garnered a niche group of adherents, as seen by the #MuleBoyz movement propagated by Highsnobiety's Jian DeLeon and Noah Thomas.

Perhaps this is in reaction to hype-induced sneaker fatigue or is just a natural progression as the rise of menswear has broken down barriers and (re)introduced more silhouettes into the lexicon. Whatever the case, the more options we have for our feet, the more opportunities there are to have fun and freak it.

Get your spidey Beatniks — The Pleasures Beatniks are slated to release July 31, as revealed by a since-deleted product listing on Goodhood. This likely means other retailers will have stock in addition to Pleasures and Reebok's respective stores.

Given sneaker brands' pattern of using collaborations to launch new or revived silhouettes, you'll likely see a lot more Beatniks going forward. So now's the time to hop on these far out sandals.