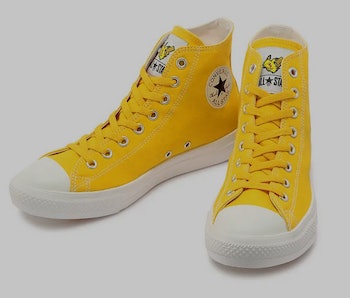 Converse is paying tribute to the iconic Pokémon franchise once again with four new pairs of All Stars. Although collaborations nodding to kids' shows and cartoons tend to run on the side of overly graphic and jam-packed with details, the upcoming sneaker pack is minimal and draws on only four Pokémon, as opposed to a wider selection in the past.

The sneakers each take after one of four of the most classic Pokémon: Pikachu, Eevee, Charizard, and Mewtwo. The color palettes reference back to the respective character’s main shade, with yellow for Pikachu, lavender for Mewtwo, beige for Eevee, and orange for Charizard.

Those who are a fan of subtlety might appreciate the details being kept to a minimum here. A pixelated graphic of each character is stitched on the tongue tag, and the heel displays a profile of the Pokémon with its name, height, weight, and Pokédex number. Eevee and Charizard are referred to as Eiuvui and Lizardon, as the two sneakers will release as Japan exclusives. Converse also pays homage to the series on the hangtags, which resemble a Poké Ball, Great Ball, Ultra Ball, or Master Ball.

Preschool sizing also joins the lineup featuring Pikachu, Eevee, Piplup, and Mew versions. The All Star logos are holographic and change design to mirror the balls on the hangtags. Two glow-in-the-dark sneakers round out the pack, according to Hypebeast, although official images haven’t hit just yet.

Gotta catch ‘em all — This isn’t the first time Pokémon has lent its name to a sneaker collab, and it’s not even the first to appear on Converse. Fila added the characters to some sneakers of its own, and Adidas followed suit in 2019. The previous Converse iterations played a bit more with the sneakers’ silhouette by incorporating Pikachu’s face into the toe and using more prints in the uppers. Pokémon-themed footwear tends to catch the eye of those who were raised with the series or even want to pass down the traditions to their own families, so full-family sizing is a plus in this case.

The Pokémon Converse will release as a Japan exclusive for about $99, but if you want to catch at least one of the pairs, a proxy service could prevent you from having to pay resale.