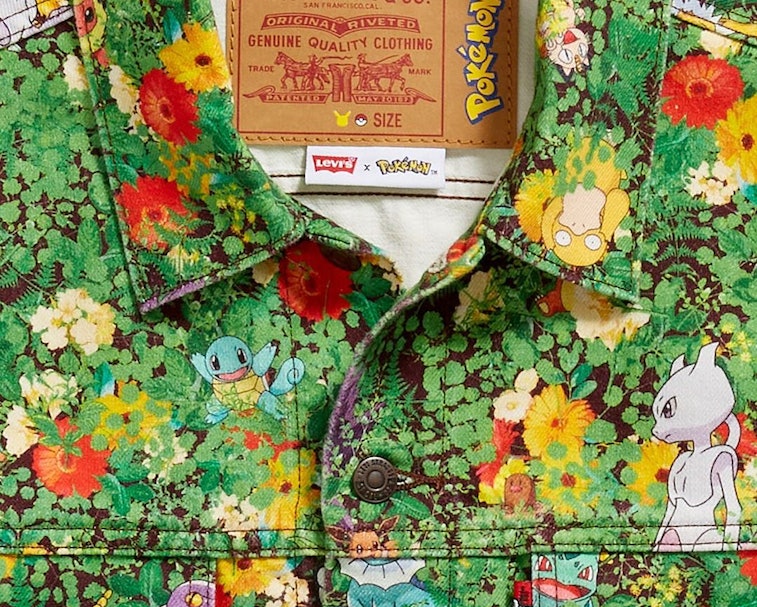 Fashion really loves anime right now. We're just hitting February, and already Gucci has released a Doraemon capsule, Loewe has become enamored with My Neighbor Totoro, and Levi's has been teasing Pokémon denim. Cuteness and nostalgia are forming a powerful force, one you may not be able to resist while getting dressed.

Levi's is now moving past the teaser phase and has released the lookbook for its Pokémon collab, which is set to release February 15. Denim forms the backbone of the collection as you'd expect, but there's also a small range of T-shirts, sweatshirts, and accessories including a Pikachu ears beanie.

Most fetching of all is a set of all-over print jeans and denim jacket with a forest scene filled with Pokémon. I'll need a fanatic to verify, but it appears as if all 150 of the original creatures show up amongst the foliage — giving you a one-cop path to catching 'em all.

Pikachu is the star, duh — With few exceptions, the Levi's x Pokémon capsule is Pikachu-centric. The little guy appears on '90s-style stonewash 551 straight leg jeans and a Vintage Fit Trucker jacket that come in as #3 and #4 for most coppable pieces, as well as T-shirts and crewneck sweatshirts.

If you want a greater variety, another features him along with 15 other Pokémon including the OG starter trio and Gangar. Rounding out the goods, or at least those that've been announced, are a Pokéball shoulder bag, forest scene drawstring backpack, and an Ash Ketchum-style hat with Levi's branding in a green Pokéball patch.

"It's so fun to hear people talk about their love of Pokémon. Everyone has their favorite," Karyn Hillman, Levi's chief product officer, said in a release. "The fact that we had this ability to play and create with so many iconic Pokémon and characters was a really special experience ... it's nostalgic and optimistic, with a little bit of escapism."

Gear up soon — There will be plenty of opportunities to cop the Levi's x Pokémon jawnz, but you'll be met with competition at each stop. The capsule will release February 15 worldwide through Levi's website, app, and physical stores — as well as "select wholesalers."

Expect rapid sellouts and start deciding what you want now if you want a chance at this kitschy collection.