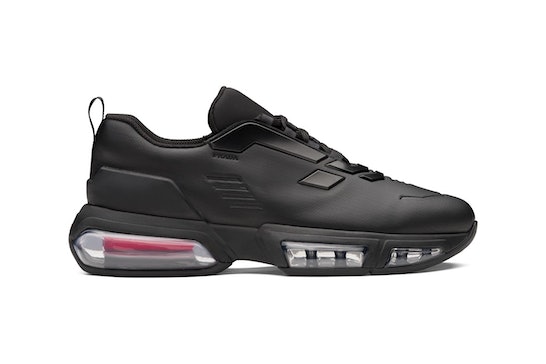 Prada's latest footwear release has piqued the attention of sneakerheads because of its loose inspiration from the Nike Air Max 95. The Collision Technical Fabric sneaker from Prada's performance-focused Linea Rossa line is a sleek, futuristic shoe with "Air" cushioning that looks a bit like one of the most beloved Air Maxes of all-time.

While not as clear of a riff as Louis Vuitton's LV Trainer is to the Air Jordan 3 or Margiela's recent Air Jordan 4 lookalike, the similarities on Prada's new kicks are enough to draw comparisons. Prada doesn't seem to mind any scrutiny, as the brand goes out and calls the cushioning system "Air" in its product description. But thanks to the glossy, sculpted upper, the unceremoniously named "Collision Technical Fabric sneaker" is worth judging on its own merits.

What is it made out of? — No really, what is this sneaker made out of? Prada has only said the upper with a fetching patina is constructed from "fabric," which is far from a satisfying answer. Is it treated foam, nylon, or some sort of faux leather? We have no idea of its composition, beyond the name's indication that it has a technical element.

Less ambiguous are the rubber elements that help give the lowcut sneaker its futuristic profile. Out of the three color schemes to launch the silhouette, the all-silver version is the most optically unfortunate, as it could have been placed in the chromed-out kitchen where Squidward had a mental breakdown on SpongeBob. One of those ingratiating robot buskers could wear it, or the Tin Man in the inevitable Wizard of Oz reboot, and I'm not sure that's a look anyone wants to recreate in their normal life. It's maybe one step better than the Adidas Kobe 2, which endures as one of the ugliest sneakers ever made.

The all-black and all-white versions, however, are much less offensive. The limited deviations in color come from red in the Air unit underneath the heel and a stripe that wraps around it from the outsole to midsole. They're kept clean with the only other sign that they're from Prada coming from a tiny name embossing as near the collar. If they're worth $950, though, is another discussion.

Who are these for? — With less overt branding, the Collision Technical Fabric sneaker isn't your usual flex. And even though it looks like one of Prada's most explicit sneakers for athletics, is there anyone who thinks they couldn't get better performance from Nike for a fraction of the price?

It's hard to think of a justifiable reason to purchase these unless you just really love how they look and have nearly a grand to blow. Should you fall in that camp, go right ahead with your frivolity and pick up Prada's latest sneakers directly from the source.