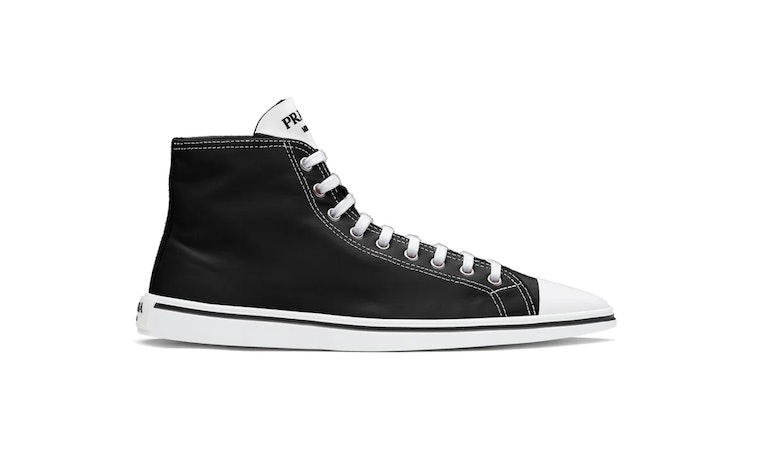 Before it was announced that Kim Jones would officially collaborate with Converse, his unofficial spin on the Chuck Taylor became one of his first hits upon taking the lead at Dior. Rick Owens was recently tapped for a collab as well, and he reimagined the nearly 100-year-old sneaker with freakishly blocky distortions.

We're seeing high fashion's love for the Chuck Taylor continue to spread with Prada offering up its own classic-inspired sneaker. Releasing as both a high- and low-top, the Chuck-like "Synthesis" sneakers feature a bizarre pointed toe so long it took numerous edits to get it to fit in the screen on this here website. They come as part of Prada's SS21 collection, the first done under the co-creative direction of Miuccia Prada and Raf Simons.

Prada is currently in cahoots with Adidas, meaning an over-the-table partnership with Nike-owned Converse is going to happen anytime soon. But it's interesting to see that both Rick and Raf, two of the definitive designers of the past 25 years, came up with somewhat similar ideas inside and away from the Converse umbrella. The two shoes are comical in proportions, and deciding between the toe will come down to your preference for a square or pointed toe.

There are high heels, too — The Synthesis sneaker also comes in a high-heeled version, although thats where the ties to the Chuck Taylor become less visible. It could pass off as a (somewhat) ordinary heel that poses physical danger to the eye — but the similarities on the out-and-out sneaker are undeniable.

No logo replaces the Converse star on the canvas upper, but Prada's Milano logo is molded onto the midsole at the heel and also appears at the tongue. The high-top version is available in either black or white — two essential color schemes for the Chuck Taylor.

Prada is largely mum on the composition, besides saying the removable insole is made of leather, it's gotta be a step up from what you'd get from $55. And it better be once you hear the price.

Get your pointy faux Chucks now — Prada's lineup of Synthesis sneakers is available now through its website, with prices starting at $750 for the low-top and topping out at $950 for the heels. We've already seen that Dior can sell a Chuck Taylor riff for a significant markup, so Prada's slightly cheaper version should find a market as well.