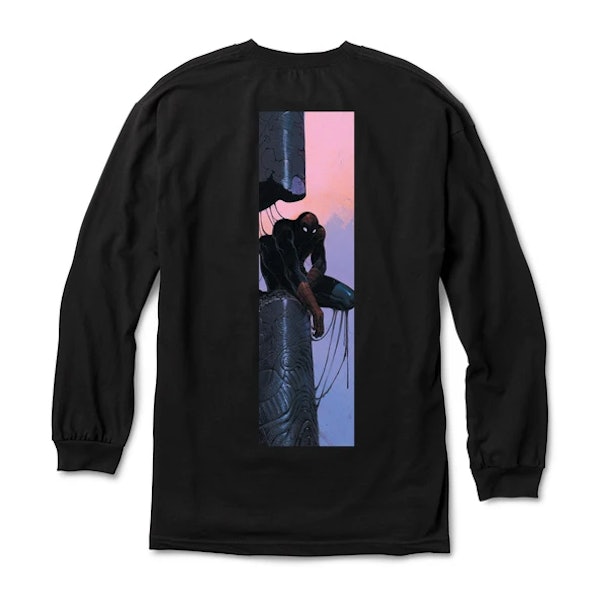 Primitive Skateboarding is no stranger to nerd culture. Paul Rodriguez's brand has collaborated with Rick and Morty, Dragon Ball Z, and Naruto Shippuden in the past, and now it's bringing Marvel into the fold.

Primitive's Marvel collection features artwork from the late cartoonist Jean Giraud, aka Moebius, from his five-year stint inside the world of Stan Lee. His grittier takes on Spider-Man, Iron Man, The Punisher, Silver Surfer, and The Thing feature throughout the collection, which includes streetwear staples like T-shirts and hoodies, as well as a set of skate decks. For the true Moebius stans, some of his original characters also appear in the collection, with Arzak, Anxiety Man, and Starwatcher represented.

Stand out from the crowd — While there's no shortage of Marvel in streetwear, Primitive's collection really sets itself apart by featuring Moebius' work. The acclaimed artist is also known for his contributions to Alien, Tron, and Alejandro Jodorowsky's unproduced Dune. His darker, more surreal style makes wearing comic book attire look a little less cartoonish. In other words, it's badass.

The highlights — Appropriately, head honcho P-Rod has Iron Man on his signature deck, but it's the Spider-Man graphic that looks best, from Robert Neal's deck to its narrow cropping on the longsleeve tee. The Thing hoodie is a great look, serving as encouragement to bring more orange into your style. And the Silver Surfer hit is quite dynamic, with the unintended bonus of bringing Max B fans into the fold.

Most fitting for the current state of the world is Anxiety Man, who's got his hands to his head on a deck, T-shirts bleached and unbleached, and a hoodie. We are all Anxiety Man right now, so why not express our collective unease via the wardrobe? Talk about relatable content.

Scoop it up — The full collection is available now on Primitive's website, with prices ranging from $33.99 for the tees up to $74.99 for the most expensive hoodie. Because everything's less than a Benjamin, your retail therapy shouldn't cause any financial dread down the line.