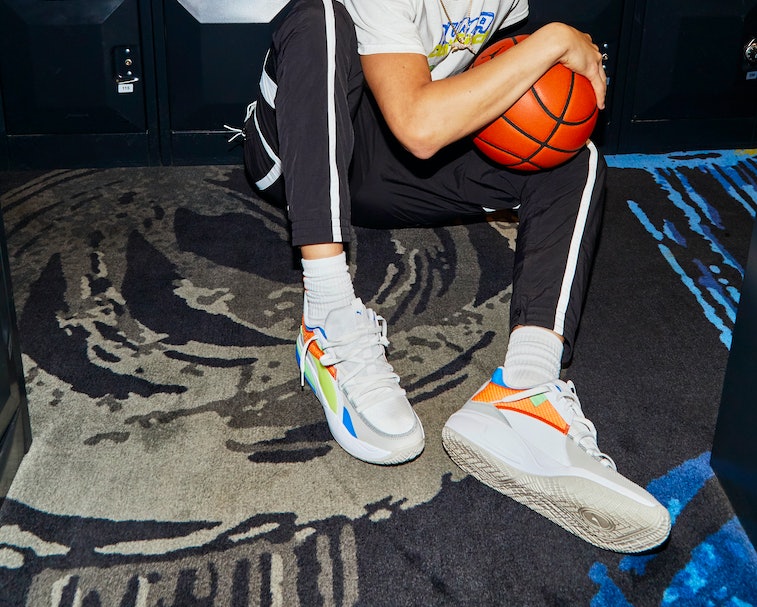 Puma’s “Rider” series has born several models of lifestyle sneakers, and for the first time, it’s headed to the basketball court. The new “Court Rider” will launch as the in-game sneaker for Puma’s roster of young professional basketball players, including LaMelo Ball, RJ Barrett, Deandre Ayton, and Katie Lou Samuelson.

While bearing few visible similarities to other Rider kicks, the new performance version features the same full-length Rider foam midsole retooled for hooping. Together, a high-abrasion rubber outsole and dynamic lacing system provide support and utility while cutting and jumping. Puma is saying much more about the Court Rider’s technology, and at just $100 it’s likely to be on the lower end of capabilities in the market. (Pro players never wear the same model that goes on sale to the public.)

Still, the Court Rider should get the job done for whatever level of basketball you play — and it ain’t too bad looking either.

What’s new? — The Rider series has been a consistent source of creativity from Puma, with numerous collaborators and tweaks that have included boot-like rope lacing, futuristic accents, and its own chain. At its core, the Rider is a very on-trend chunky sneaker — but hasn’t yet crossed over to the point of ubiquity.

Revamped for ball, the Court Rider tucks Puma’s stripes underneath a bright ripstop nylon pattern and above a more robust midsole. Tumbled leather and mesh are also utilized in the noisy upper, and the coolest detail of all is the repeat “Puma” text that makes up the fractioning. A hangtag on the sneaker’s medial side may look like mere decoration, but it should also make for easy carry if you plan on changing shoes once you get to a court.

Launching soon — Puma will first release the white, grey, and neon version of the Court Rider seen here on April 13 through its website, NYC flagship, and select other retailers. From there, the brand has promised many more variants to come, including color schemes inspired by popular video games and retro cartoons.

Like other Rider kicks, the Court makeup isn’t likely to make a huge splash — but it should be a reliable hoop shoe that’s also relatively suitable for everyday wear.