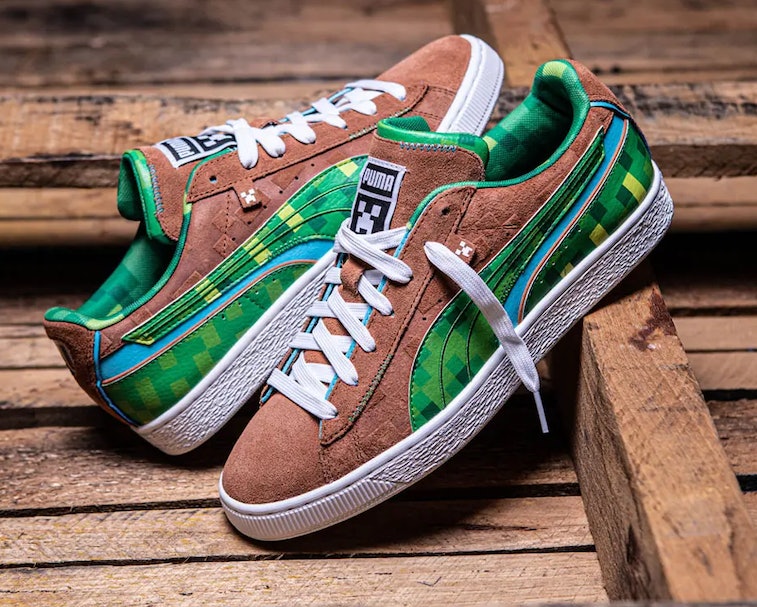 Minecraft may not have its next software update, but it does have its next collab. The video game just announced a partnership with Puma that’ll hopefully give the Steve character a better sneaker rotation.

Last week, the video game took to Twitter to drop a teaser video that consisted of a Minecraft creeper being chased by an ocelot cat. At the end of the video, the ocelot slows down enough to take the shape of Puma’s logo.

Two can play at that game — Minecraft furthered the conversation with another teaser for the collab that depicted the construction of a virtual Puma Suede sneaker. In real life, the shoe sits on a white outsole with brown uppers, green and blue accents, and white laces, colors that are a nod to the game’s dirt, grass, and water building blocks. To finish off, the tongue tags feature a “Creeper” face that replace the Puma cat.

Franchises like Disney, Marvel, MLB, Star Wars, and a bunch of others have Minecraft collabs under their belt already, but the Puma announcement marks the first lifestyle brand to join the ranks. With Minecraft surpassing 1 trillion views on YouTube and 141 million active global players, the video game is in the big leagues for sure.

Puma itself is no stranger to partnerships in the gaming space. In August, the brand joined forces with Nintendo and Animal Crossing to bring a footwear and apparel collection to life. Given that crossover, Minecraft and Puma will probably create apparel with the game’s characters and motifs, though it’s a toss-up how this will manifest virtually.

The collab is creeping up — Characters in Minecraft may not have ten fingers or toes, but a new Puma wardrobe could be just what they need. The video game and Puma will likely keep releasing bits and pieces of their partnership by way of social media, but the Puma Suede will drop February 5 on the brand’s site. Game on.