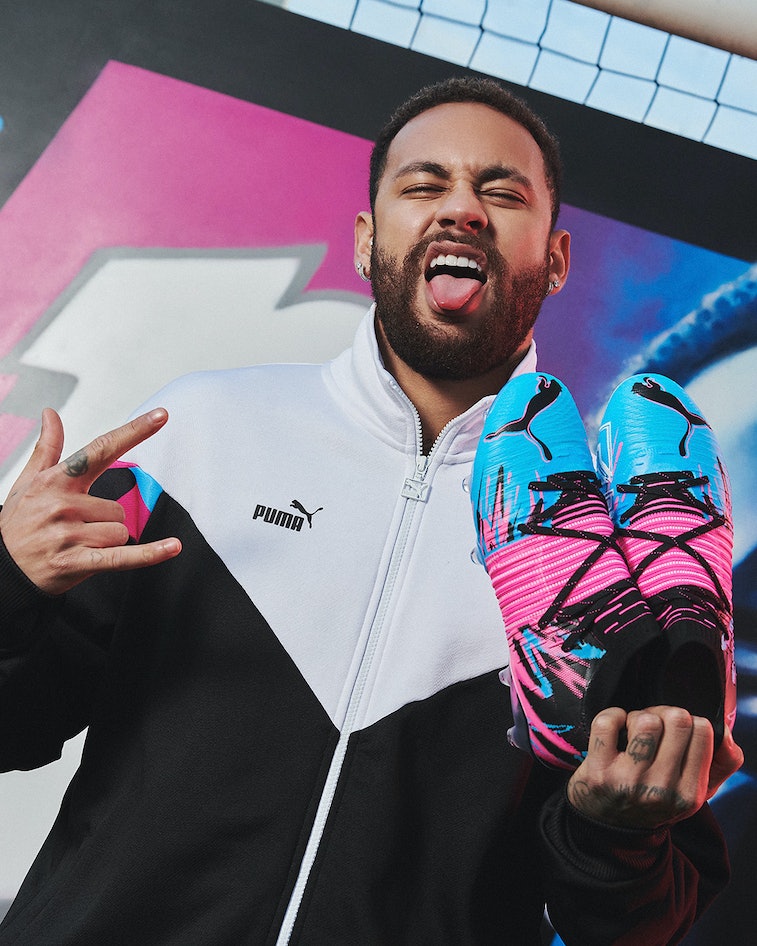 Neymar Jr. is releasing a vibrant “Creativity Collection” in partnership with Puma. The capsule will include the Future Z 1.1 Creativity football boot, which the star forward of Paris Saint-Germain helped launch, along with apparel and training gear. With bright colors and innovative design, the collection is an homage to football’s most exciting players.

The Future Z 1.1 football boot in particular pays tribute “to the game’s most exciting players, the creative mavericks who stand out with skill and speed of thought, shaping the game to their version with every move, every play, every action to drive the opposition crazy,” Puma shared in a press release. The message is fitting for the brand’s partnership with Neymar Jr., which began after the player left Nike back in the fall season of 2020.

As vibrant as the game — Obviously, the star of the show here — besides Neymar Jr. — is the Future Z 1.1 football boot. Dressed in new shades of neon blue and pink with hits of black, the cleats boast a vivid color scheme reminiscent of the outstanding players donning them.

At the heel of the shoe, both the hot pink and blue hues disperse in stripes that mimic spray paint, and campaign imagery shows the cleat laying amongst spray paint cans humorously decorated with Neymar Jr.’s initials. As far as branding goes, the Puma logo can be seen on the toe of the cleat, while the word “FUTURE” has been spelled out across the medial walls in a bold white font.

Matching apparel including leisure tees, sweatshirts, sweatpants, and lounge shorts are up for grabs, settling for black, white, or gray shades. Each piece still boasts the blue and pink colors through its “NJ” branding. Training gear like shorts and a jersey are also available, and boast a more graphic design featuring the neon blues and pinks seen on the Future Z 1.1.

Score the collection — The Creativity Collection apparel has already launched on Puma’s website, ranging from $30 for tees to $75 for Neyman Jr.’s jersey. To build up hype, however, the Future Z 1.1 football boot won’t debut just yet — you’ll have to wait until March 21, when Neymar wears the shoe to start in the upcoming PSG vs. Lyon Ligue 1 game. Of course, no one can wear the shoe better than the player himself, but with Puma’s new collection, you can certainly try your best.